Start a Wiki
watch 00:53
Plants vs. Zombies Garden Warfare 2 – Seeds of Time Map Gameplay Reveal SDCC Trailer
Do you like this video?

Seeds of Time is a Gardens & Graveyards map in Plants vs. Zombies: Garden Warfare 2. It takes place in a time-traveling-based theme park, which was first shown at E3 2015.

The zombies' goal is to go through the theme park, capturing the gardens on the way, and infiltrate the castle at the end with a Bootering Ram, while the plants must try to stop them by defending the gardens.

Seeds of Time is a parody of Prince of Persia: The Sands of Time.

The time travel theme park was built in 1202 by a group of wizards that pooled their resources together in the hopes of making a fortune. Now the Zombies want it, because it's a fun place to be!

At the end, a cutscene will play to determine a plant or zombie victory.

If the zombies manage to push the Bootering Ram all the way to the castle, it will break down the doors and the zombies will be teleported in front of the castle. The castle gets damaged and taken over. A stained glass window of Rose falls apart and gets replaced by a Zomboss tapestry.

If the plants manage to stop the Bootering Ram from going to the castle, the plants will celebrate and the castle will be stayed. After the zombies lower the bridge, they will be kicked out by the bridge into the moat. 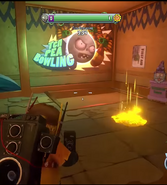 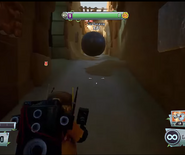 A Bowling Ball trap that appears in the easter egg 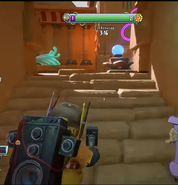 When the player finishes the bowling trap, they are given access to an area where they can attack the plants from behind 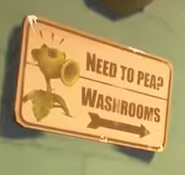 Retrieved from "https://plantsvszombies.fandom.com/wiki/Seeds_of_Time?oldid=2257514"
Community content is available under CC-BY-SA unless otherwise noted.