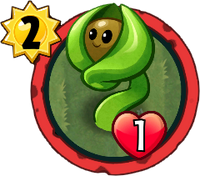 Start of Turn: This transforms into a random Plant that costs 6

or less.
It's the tiny seed of a... nobody actually knows.
Seedling is a basic common plant card in Plants vs. Zombies Heroes and a member of the

. It does not have any traits, and its ability transforms it into a random plant that costs 6

or less at the start of the next turn. Its closest zombie counterpart is Mystery Egg.

It is based on a seedling, a young plant sporophyte developing out of a plant embryo from a seed.

Its description references its ability to turn into a random plant.

It's the tiny seed of a... nobody actually knows.

Using Seedling is a slightly risky move, as even though it has the ability to transform into powerful plants like Super-Phat Beets or even legendary plants like Three-Headed Chomper, it can also transform into a weak or useless plant, like Peashooter or even into itself, or a plant that doesn't synergize well with your deck, like The Podfather in a non-pea based deck. Make sure to protect Seedling while it is on the field with plants that have the Team-Up trait, such as Shellery, since if taken out by a zombie, Seedling will not be able to transform into anything, wasting 2 sun and a potential free plant. You can also play it in Force Field so that it doesn't get taken out by a zombie and it can transform. However, only Spudow can do this naturally.

If possible, play this card in the earlier turns, as less dangerous zombie fighters will appear due to the low number of brains the zombie hero may have, especially if the zombie hero has 0 brains and if any of the lanes are freely open. However, the player will still need to rely on luck on whether it will survive, as a zombie trick can easily destroy this. The player can use tricks such as Fertilize to increase the health of Seedling, however, its health boost will not affect the plant it transforms into. Therefore, boosting tricks are not recommended, even if necessary, as the boost will be lost when it transforms. Instead, environments are a better idea. For example, Captain Combustible can play The Red Plant-It so that Seedling will gain a boost, which will still apply for the plant it transforms into since environments affect all plants in it.

Very rarely, Seedling may transform into Brainana. If that happens, your opponent will lose all their brains which not only prevents them from playing tricks, but also makes them unable to play zombie fighters. In that case, you should apply maximum brute force against your opponent as their ways of recovering damage suffered are extremely limited this turn, giving you a chance to greatly weaken their defense. However, keep in mind that cards which cost 0

can still be played, whether thanks to its base cost (like Swabbie) or the help of other cards (like Flag Zombie).

Seedling also synergizes well with Muscle Sprout as it boosts Muscle Sprout not only by itself, but also by the plant it transforms into. However, only Captain Combustible can primarily do this. It can also activate Astro-Shroom's ability twice - when it is played, and when it transforms, causing 2 unblockable damage for each Astro-Shroom on the field. Seedling can also be played in Pair Pearadise to potentially activate its ability twice.

Usually, the AI in single player missions will never target this with zombies or tricks unless it blocks the way for a zombie, so playing Seedling may be a good idea to possibly get a strong plant.

Due to its low amount of health, you can simply use any low-cost zombie to destroy it, or cheap tricks such as Bungee Plumber or Rolling Stone. Take advantage of its low health with

Frenzy zombies, such as Smashing Gargantuar, since they should be able to destroy the Seedling in one attack, which allows them to attack again, damaging anything behind it, and stat-degraders like Nibble or Acid Rain. If you do not know when will it be played, simply use tricks that spawn zombies like Beam Me Up or Summoning, direct damage cards such as Conga Zombie, or moving cards like Sumo Wrestler or Terrify.

Retrieved from "https://plantsvszombies.fandom.com/wiki/Seedling?oldid=2308018"
Community content is available under CC-BY-SA unless otherwise noted.