For the version in Plants vs. Zombies Heroes, see Sea-Shroom.

After beating Level 3-10
Sleeps during the day
Sea-shroom has never seen the sea. It's in his name, he's heard loads about it, but he's just never found the time. One day, though, it'll go down.
Sea-shroom is a mushroom plant that appears in Plants vs. Zombies. He is the first plant unlocked in the Fog stage, and the 25th plant unlocked overall.

He performs almost identically to Puff-shroom, as he costs 0 sun and can shoot spores at zombies three tiles ahead of where he is planted, but has a slower recharge rate and can only be planted on water tiles in the Pool and Fog levels.

He appears to be inspired by the aquatic gilled mushroom (Psathyrella aquatica), a real life species of fungus from Oregon that represents the first ever report of a gilled basidiomycete fruiting underwater.

Due to him being highly similar with Puff-shroom, Sea-shroom shares a role with Puff-shroom as a "cannon fodder," a highly disposable plant meant to be placed and eaten in great numbers. Sea-shroom's performance in this role however is much more limited, as the plant has a slow recharge rate and cannot be planted on land. Furthermore, the lack of dangerous zombies on pool lanes reduces the necessity to use Sea-shroom as a makeshift wall; on the other hand, this also means that Sea-shroom's limited firepower output can remain useful for a longer period of time compared to Puff-shroom's.

While Imitater can be used to remedy Sea-shroom's recharge problem, this is not recommended since this deprives the player of a cooldown reduction for potentially more useful plants. However, Sea-shroom can also be used to trick Dolphin Rider Zombie into jumping early and losing its dolphin in the process.

It is not advised to use Coffee Bean on this in any Pool levels. Instead, use Lily Pad and a stronger plant. 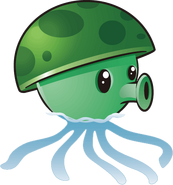 Sea-shroom seed packet in the iOS and Android versions

A left-facing Sea-shroom in Zen Garden (Note the mycelium)

Fog with Sea-shrooms, Lily Pads and other mushrooms