For the version in Plants vs. Zombies, see Sea-shroom.

None
Teaches swimming lessons to disadvantaged Plants in his spare time.
Sea-Shroom is a premium uncommon plant card in Plants vs. Zombies Heroes and a member of the

He has the Amphibious trait and does not have any abilities. His closest zombie counterpart is Snorkel Zombie.

He is based on the plant in Plants vs. Zombies with the same name and similar appearance.

Teaches swimming lessons to disadvantaged Plants in his spare time.

Sea-Shroom is mostly good in early game because in mid or late game there are going to be bigger threats which he can't deal with. This card is mostly used in Citron budget decks. It is the only amphibious mushroom in the game and that can be useful in mushroom decks. The base stats are not useful but it can be buffed with Buff-Shroom or activate Punish-Shroom's ability.

A good strategy is to evolve Gloom-Shroom on lane 5 on it so it becomes more difficult to remove. A Lily Pad can do the same job for 1 sun less but without activating the ability. These are the only good things about it however, Sea-Shroom is decent for budget but there are better alternatives.

This card isn't much of a threat. However, if it is used to block or destroy a zombie, you can awlays use Rolling Stone, Bungee Plumber, Celestial Custodian or other small removal cards. 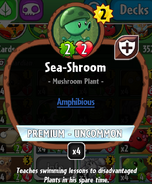 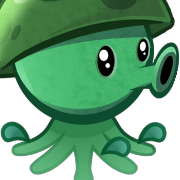 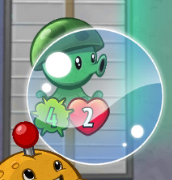 Bubble Up being played on Sea-Shroom

Gardening Gloves being played on Sea-Shroom

Sea-Shroom tinted gray due to a glitch 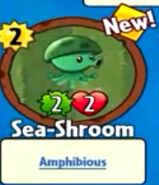 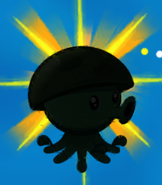