Plants damaged by Sonar Shot can be viewed through walls.

Rare
Don't tell anybody, but the Scuba Soldier doesn't even know how to swim. He wound up on the bottom of the ocean floor after falling asleep on the deck of one of Zomboss' boats.
Scuba Soldier is a Rare Foot Soldier variant in Plants vs. Zombies: Garden Warfare 2. His primary weapon allows him to see plants through walls after the projectile has hit a wall. He was the only Foot Soldier variant unlockable in the beta.

His primary weapon is the Sonar Shot. Its clip can hold up to two sonar missiles that can deal 16 to 25 impact damage and 20 to 30 splash damage depending on the range. If the missile hits any surface or a plant, a sonar radar will drop which reveals any plants that are hiding behind walls. Detected plants appear in green but cannot be viewed by other teammates.

The Scuba Soldier is similar to the Tank Commander in that he has a weapon with a low ammo count, but it can do a lot of damage, as well as AOE. His primary weapon deals lower damage than the Tank Commander, but he has an extra shot before he must reload and an added effect- this effect allows him to see any plant hiding behind walls, which makes it easier to track them down and vanquish them. However, the sonar effect can only be seen by him, not his teammates. This makes Scuba Soldier a solid self support character on top of being a good offensive one. Don't be afraid to engage Sunflowers or Roses in close range, as you can vanquish them in two direct hits.

The Scuba Soldier can be a major threat to you if not vanquished. His direct hits from his primary weapon can deal over 100 damage, and they have a sonar effect on you, making your silhouette visible to them when you're behind walls. To defeat them, try to sneak up behind them and attack immediately. This may give you enough time to defeat them, and leave you with enough health, especially with Kernel Corn and Citron variants. If you consider them a major threat, Chompers can make quick work of them. Count Chompula is recommended due to the health healing ability it possesses. 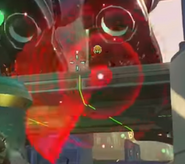