When revealed: This can't be hurt this turn.
Little known fact: He carries a door to protect himself from solar radiation.
Screen Door Zombie is a galactic uncommon zombie card in Plants vs. Zombies Heroes and a member of the

. He has the Gravestone trait, and his ability shields him for the turn he is revealed.

His description is probably referencing to sunscreen, or sun block, a lotion, spray, gel, or other topical product that absorbs or reflects some of the sun's ultraviolet radiation and thus helps protect against sunburn.

Little known fact: He carries a door to protect himself from solar radiation.

Essentially a more expensive but stronger version of Trash Can Zombie, this zombie is able to destroy a tough plant with 4 health or less and will live for the turn he is played.

You can also use this zombie to destroy a plant with 8 health or less, or to stall out Soul Patch as he does 4 damage on the turn when he is shielded, then 4 more damage the next turn.

However, be careful as your opponent can play Shamrocket, Doom-Shroom, or Squash to destroy this zombie after the turn he is played.

If you see a Hearty hero that plays a gravestone and nothing else when they have 5 brains, chances are that it may be Screen Door Zombie. If you think you can predict him, try to play a plant with 5 health or more so it is able to survive the turn Screen Door Zombie is played. However, most plants cannot take two attacks from him, so be prepared to lose that plant.

Like all Gravestone zombies, this zombie's main weaknesses are Grave Buster and Evolved Blockbuster, as it can instantly destroy him, protecting you or your valuable plants. 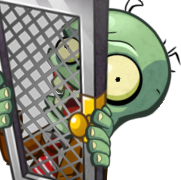 Screen Door Zombie with the 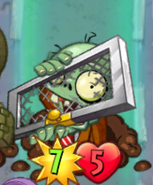 A glitched Screen Door Zombie with the

Screen Door Zombie with the

Screen Door Zombie with a star icon on his health