His screen door is an effective shield.

Toughness is "Low" if attacks ignore the screen door

Level 2-3
He got his screen door from the last inexpertly defended home he visited, after he ATE THE HOMEOWNER'S BRAINS.

Screen Door Zombie is a zombie holding a screen door for use as armor, ignoring the chilling effects of any Snow Peas, but not Winter Melons and the area damage of any torched peas hitting it. It is the seventh zombie encountered in Adventure Mode. The screen door is useless against Fume-shrooms, Gloom-shrooms, lobbed-shot plants, Spikeweeds, Spikerocks, and projectiles that hit it from behind, as the fumes go through the door, Spikeweeds/Spikerocks attack from below, and the lobbed objects go over it. These zombies are identical in all respects to regular Zombies, with the obvious difference being the addition of a screen door. It is almost the same as the Trash Can Zombie, other than their speed.

Fume-shrooms, lobbed-shot plants, Spikeweed, Spikerocks, or the backwards projectiles of a Split Pea or Starfruit can kill these zombies in 270 damage per shot.

In Wall-nut Bowling 2, this zombie can be knocked down with one hit by a Wall-nut that ricochets towards it from one side, while it takes four hits to kill it if only rolling Wall-nuts from its front.

Magnet-shroom can be used to take away the screen door, which constantly happens in Beghouled and Beghouled Twist, turning the Screen Door Zombie into a normal, weaker Zombie. Fume-shroom and Gloom-shroom fire fumes that go through the door's mesh and damage the zombie directly (it also damages the door at the same time). Lobbed-shot plants simply throw their projectiles over the shield, once again, making it useless. It is a good idea to use Cabbage-pults, Kernel-pults, Melon-pults, and Winter Melons in hard levels to negate the door. The screen door also negates the splash effect of flaming peas. Instant kills work normally on Screen Door Zombie. The player can plant two or three Spikeweeds side-by-side or one Spikerock (and maybe another Spikeweed) to kill it, as they ignore shields by attacking from below. The player can use plants that fire backwards, such as the behind of a Split Pea or a Gloom-shroom, because the door is on the opposite side of them. This makes killing this zombie easier.

Screen Door Zombies cost 100 sun in I, Zombie Too. They should be your primary choice against rows with Snow Pea and another Peashooter. Keep in mind not to place them in rows with two Spikeweeds, as they will kill this zombie. They only appear in I, Zombie Too.

A HD Screen-Door Zombie with arms, legs and hands

Screen Door Zombie in Zombies on Your Lawn

A screen door used by the Screen Door Zombie 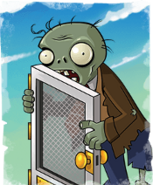 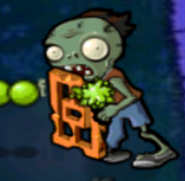 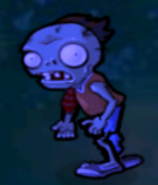 Retrieved from "https://plantsvszombies.fandom.com/wiki/Screen_Door_Zombie?oldid=2292736"
Community content is available under CC-BY-SA unless otherwise noted.