Scientists are the mobile zombie healers. The Healing Hose is great at keeping groups of zombies at full health.
The Scientist is a

Scientists are the mobile zombie healers. The Healing Hose is great at keeping groups of zombies at full health.

If Scientist has the Steam Blaster legendary upgrade equipped, Scientist's primary weapon is replaced with the Steam Blaster, which fires short-ranged steam that deals 13 damage per shot and has a chance to rapidly deals the same amount of damage and fires at a rate of 58 RPM (rounds per minute). He can unload 5 projectiles before needing to reload.

The Scientist is one of the most versatile and powerful zombie classes in the game, due to his weapon's high damage and accuracy (especially when zoomed in), his ability to self-heal, as well as his Warp ability. This makes him more of an attack character than he does support. You can either get up close and personal with your enemies and occasionally warp to distract your enemies' aiming, which allows you to confidently fire at them without having to zoom in your weapon first, or take out your enemies from a moderate distance with the zoom accuracy buff. Should you run out of health at any time, you can use the Sticky Healy Thingy to quickly patch yourself back up in the middle of a firefight, or use it while taking some cover for a safer approach.

The Dolphin Blasting upgrade is very useful for an offensive playstyle, as it allows you to gain increased rate of fire for his weapon by vanquishing enemies and it stacks up to three times, in which it will become a relatively fast-firing sniper-shotgun.

If you are using Steam Blaster, try to read the direction your enemy is moving in so they remain in the damaging steam longer to get the most out of each shot. The Steam Blaster only has 5 shots, so make sure you place them well. It also has a limited range, so use Warp to get into striking distance quicker.

You can take advantage of a rate of fire glitch to speed up Steam Blaster's rate of fire, allowing you to deal massive amounts of damage quickly. By using the Healing Hose after firing the weapon, it allows you to fire the next shot faster.

The Scientist has a major weakness in which his weapon's projectiles are rather slow, despite the low spread. Because of this, picking him off from afar with Cactus or other long-range plants might help, as you can dodge the projectiles easier that way.

Just like in PvP, the Scientist is also very powerful in free roam. The same offensive playstyle also works very well here, as enemies' attacks are much weaker and they're easier to defeat. It also allows you to beat boss fights without breaking a sweat, especially when defeating the Blight Cap or Unyielding Gnight as he's able to self-heal when needed at any time, and his Warp ability allows you to dodge their projectiles or reach objectives quicker. Scientist can Warp when Healing Hose is active allowing him to heal sprinting teammates easier, it's great for healing a teammate to max overhealth then immediately using Warp to find and heal another teammate.

You can speed up Steam Blaster's rate of fire by using the Heal Hose as soon as a shot is fired. This is especially useful for the Steam Blaster as it can almost double its rate of fire from 58 to around 115 RPM. Using macro, script, or modded controller is highly recommended to automate the process.

Steam Blaster Rate of Fire Glitch - Plants vs. Zombies Battle for Neighborville
A quick tutorial on how to perform the glitch with gameplay video
Add a photo to this gallery 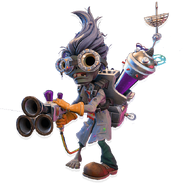 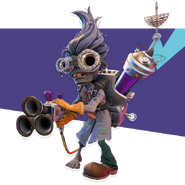 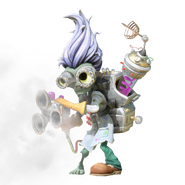 Retrieved from "https://plantsvszombies.fandom.com/wiki/Scientist_(PvZ:_BfN)?oldid=2359089"
Community content is available under CC-BY-SA unless otherwise noted.