But you can just call me Crazy Dave.
Scaredy-shroom has different capitalization or spelling depending on what game it is in. When editing, use the term used in the game in question.

For other uses, see Scaredy-shroom (disambiguation).

Takes Zombies out with superior range, but hides when they get close.

None
Takes Zombies out with superior range, but hides when they get close.

Its attack is Scaredy Shot, which deals around 20 to 35 damage depending on the range. While it is hiding, the zombies will not attack it, unless the Scaredy-Shroom attacked them first. Its Zombie counterpart is the Hide-n-Shoot Bot. If a zombie comes close to it, it hides similarly to the original game and receives moderate resistance to attacks.

It had a Lawn of Doom variant named the Frankenshroom. It resembles a Scaredy-shroom wearing a hat that resembles the head of Frankenstein's monster and was exclusively available in the event's Trick or Treat and the Happy Halloween sticker packs. Despite its unique appearance, it was functionally identical to the default Scaredy-shroom and had the same health and damage stats.

LONG RANGE: PRECISION
Takes Zombies out with superior range, but hides when they get close.

It's alive! It's alive!! It's... a Scaredy-shroom with a stylish new costume.

Takes zombies out with superior range, but hides when they get close.

Since the Scaredy-shroom hides when a zombie comes near it, it is recommended to put it at the back of your defenses. It works well if placed on an elevated spot with a good view of the surroundings. This will allow it to damage or even shoot down most zombies from afar before they come too close. Putting it in elevated positions will benefit its vantage point.

The Scaredy-shroom is not useful if placed too close to the zombies because it will hide and become useless, however this can still be a good thing as the Scaredy-shroom almost becomes shielded from attack. Its superior range allows it to function as a long-range Sniper to attack zombies from afar. It is especially useful when used in combination with Tallnut Battlements or Iron Maidens.

When in the Plant's Town Center in Plants vs. Zombies: Battle for Neighborville, it is useful to plant a Scaredy-Shroom at the entrance to the plant's base, as the Scaredy-Shroom will reward the player with XP for each zombie that it takes out with its superior range.

A Scaredy-shroom in battle (promotional image) 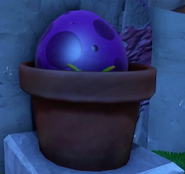 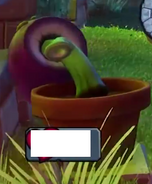 A vanquished Scaredy-shroom
Add a photo to this gallery

Retrieved from "https://plantsvszombies.fandom.com/wiki/Scaredy-shroom_(Spawnable)?oldid=2290838"
Community content is available under CC-BY-SA unless otherwise noted.