Legendary
TBA
The Scallywag Mech is a playable zombie Z-Mech variant in Plants vs. Zombies: Garden Warfare 2 who was added in the Frontline Fighters DLC as an alternate form for the Scallywag Imp.

The Cluster Cannon is a rapid-fire, semi-automatic shotgun weapon that deals 35 damage to enemies. This weapon can only be used when the player is not holding down the aim button. Firing it takes up 1 ammo.

The Hooligan Howitzer fire explosives that deal 40 damage to plants directly hit by it. This weapon can only be used when the player is holding down the aim button. Firing it takes up 2 ammo.

When the Scallywag Imp calls in his Scallywag Mech, he can be a living nightmare. His abilities and primary weapons are excellent for crowd control, and he can easily destroy plants from a long ways away with the Hooligan Howitzer, dealing 40 damage for a direct hit (in addition to dealing splash damage) and pulverize close-range threats with the Cluster Cannons, dealing 35 damage per blast, but you should never attack a big crowd of plants. Try firing the Crusty Gigabomb at the crowd to scatter them, use the Hooligan Howitzer to bombard any assailants or snipers into oblivion and mop up the rest with the Cluster Cannon. Should your vessel be surrounded, you can use the Peg Leg Kata or abandon ship with the Explosive Escape, laying waste to anyone unfortunate enough to be near you.

Once Scallywag Imp deploys his mech, be extremely careful, you are effectively dealing with a supercharged version of Captain Deadbeard, meaning he can deal high damage to a given target at any range at any time. The only way to effectively deal with the Scallywag Mech is to use a team against it and even then, the mech's high damage and health can make taking it down a challenge. As always, watch out if you ever go to close as the enemy can evacuate from the Mech and wipe you out. Use ice elemental characters and the Citron's EMPeach to disrupt the Mech's normal function and disable most of its crowd control abilities and take him down, as he won't be able to use the Explosive Escape when stunned. The Future Cactus is also a very good character against this Mech, as around four fully charged shots can vanquish him. 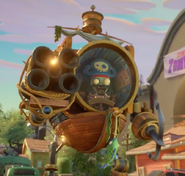 Scallywag Imp inside his Scallywag Mech 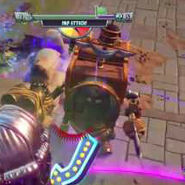 Another view of the Scallywag Mech