The haircuts that Sawgrass gives Dave are so beautiful, even doves cry. So when Dave plops his signature pot over her artistry, let's say it's good that there are plenty of zombies where Sawgrass can work out her frustrations.

Sends sawblades in both directions, damaging all zombies they hit.

Sawgrass is a Rare Groundcover plant in Plants vs. Zombies 3. She deals heavy damage to zombies that walk over her.

Sawgrass is the last Ground plant the player unlocks, being unlocked with Melon-Pult after beating Floor 23 of Devour Tower. Her seed packets are more likely to be dropped in BBQ Beach breakout battles.

She costs 3 sun and deals a burst of heavy damage to all zombies walking over her when she attacks; she has to recharge her attack after usage.

Sawgrass is based on fen-sage, also known as sawgrass or twig-sage, large sedge, with a nearly worldwide distribution in tropical and temperate regions in the genus Cladium characterized by long and narrow leaves which have sharp sawtooth-like margins.

Her Plant Food projectiles seem to be based on a circular saw blade (also called a circular saw), a power-saw using a toothed or abrasive disc or blade to cut different materials using a rotary motion spinning around an arbor.

The name of her Plant Food comes from the seesaw a common playground toy that is often characterized by a long, teetering board supported by a single pivot point.

Her introductory quote is a reference to a famous line in the 1984 comedy film Ghostbusters, "We came, we saw, we kicked its ass", which in turn is a reference to the famous quote by Julius Caesar, "Veni, vidi, vici" (In English: "I came, I saw, I conquered").

Sawgrass' Plant Food ability is named See? Saw!. Sawgrass launches two powerful sawblades both in front of and behind her, these sawblades damage all zombies in Sawgrass' lane.

Sawgrass' Tacobility is Slice & Dice, which allows Sawgrass to recharge her attack faster, in addition to being able to deal more damage at a time. 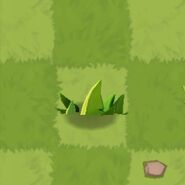