Leafy Evolution: All Plants in all lanes and your hand get +2

.
Neptuna planned her Triassic Invasion perfectly. But like so many conquerors before her, she underestimated the Spinach.
Savage Spinach is a triassic super-rare plant card in Plants vs. Zombies Heroes and a member of the

. It does not have any traits, and its Leafy Evolution ability gives all plants on the field, including it, and in the plant hero's hand +2

It is based on the spinach (Spinacia oleracea), an edible flowering plant whose leaves are eaten as a vegetable.

The claws at the end of its arms are reminiscent of those belonging to the Marvel Comics superhero Wolverine.

Its name is a combination of "savage," referring to its claws and facial expression, and "spinach," the real-life plant it is based on.

Its Evolution ability may be based on how Popeye the Sailor gains strength after eating canned spinach.

Its description references how the Spanish have been underestimated by conquerors throughout history.

Neptuna planned her Triassic Invasion perfectly. But like so many conquerors before her, she underestimated the Spinach.

Savage Spinach is only a mediocre fighter by itself, with no actual tribe synergies aside from letting Typical Beanstalk Conjure a leafy card. But if you can activate its Evolution ability, Savage Spinach is well worth the sun spent. This ability is arguably the most reliable and effective way of mass strength-boosting: other cards can only boost plants on the field (like Berry Angry), or have limits on what plants that can be boosted (like Spineapple and Go-Nuts).

Just like Onion Rings, a deck focused on drawing cards is optimal for Savage Spinach as its ability can boost more plants. The major difference is that you do not need to have any concerns for your cards being weakened, as while Onion Rings will turn the stats of all plants your hand into 4

, Savage Spinach will only add to the already existing strength of the plants.

While there are many leafy plants in the game, a particularly good plant for Savage Spinach's Evolution is Pea Patch, as it also boosts Savage Spinach further on top of activating its ability, making Savage Spinach a 7

plant on turn 4, which will be very threatening for your opponent if they don't have the right cards. However, to use that combo on turn 4, you must keep Pea Patch alive on turn 2 or 3, which is not the easiest task to do due to Pea Patch's mediocre health. Other decent choices are Lily Pad, who allows Savage Spinach to be played on the aquatic lane, and Shellery or Umbrella Leaf, who allows Savage Spinach to be played on a lane with another plant to tank the damage, not to mention that all of them have traits that make them harder to get hit. However, they are also very frail and vulnerable to tricks.

Savage Spinach's strength boost is paired well with plants with the

Strikethrough trait, as well as plants that attack on multiple lanes. Potted Powerhouse also benefits greatly from the strength boost, but it should be noted that only the strength boosts for the plants on the field count towards her ability.

Being an attacker, Savage Spinach's weaknesses are pretty generic; instant-kills like Rocket Science and Locust Swarm, and

Deadly zombies are effective at destroying it. Umbrella Leaf can protect Savage Spinach from tricks, while Team-Up plants can take a hit for Savage Spinach.

The best counter for Savage Spinach is to prevent it from activating its ability, as most of its strength comes from it. But since you can't stop your opponent from playing leafy plants, the best you can do is to destroy any leafy plants already on the field.

Beastly heroes have cards that can take out most early-game leafy plants, including Lily Pad, Shellery, and Umbrella Leaf. But there is little you can do if Savage Spinach is played later, as your opponent can play a leafy plant and then Evolve Savage Spinach on the same turn without any interference.

If Savage Spinach Evolves, it can wreak havoc on you easily. While you can stop it quickly with something like Rocket Science or

Deadly zombies, you should beware of Umbrella Leaf and bonus attacks, both of which the Mega-Grow class has access to. You also have the boosted plants to worry about. Fortunately, you can destroy them just as easily as usual (although they will pack a bigger punch), because Savage Spinach doesn't boost health. 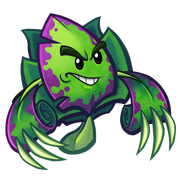 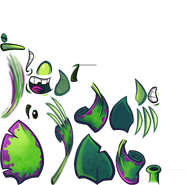 Evolved Savage Spinach on the field

Unevolved Savage Spinach on the field 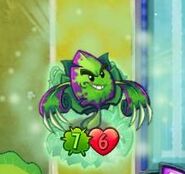