For a similar zombie in Plants vs. Zombies Heroes, see Primeval Yeti

Fire Ball
Fire Blast
Fire Storm
Sasquatch is a boss in Plants vs. Zombies: Garden Warfare 2 and the very first boss to appear in the game mode Boss Hunt. He resembles a Yeti Zombie with brown fur wearing an ushanka. He appeared in Sandy Sands in the mission "A Banquet for Sasquatch." According to the mission's description, he was eating everything, including the ruins. Rather than using ice like the Yeti, the Sasquatch used fire attacks, and had the ability to throw fireballs. His hunt first aired on September 22 through 25, 2016, and later returned on March 30 to April 2, 2017.

At the beginning of the boss hunt, the group of players would have to defeat waves of zombies. Zombies in this battle included:

Once Sasquatch appeared, he would begin his attack patterns, and the group would have to work together in order to lower his health as he ran around. Once a quarter of his health was depleted, he dug into the ground, which began phase 2.

Sasquatch then conjured Healing Burgers around the map. The players only had a little time to locate and destroy each one as they appear. 10 extra seconds were awarded for destroying a burger, giving more time to destroy the next one. Failure to destroy all the burgers in time would result in Sasquatch healing 1/8 HP, which prolongs the battle.

Once all burgers were destroyed, Sasquatch then became famished, and prepared an instant-kill attack that would strike in 40 seconds. Players would have to find and locate the garden that spawns on the map, and raise it in order to create a shield that blocked the attack. However, Blitzers spawned in this phase, which could push the player out of the circle. After 40 seconds, Sasquatch would use "Hunger Pang's Inferno," which instantly vanquished any plant outside of the circle. If at least one plant was still alive, Sasquatch would reappear from under the ground, and the battle would continue. It would go back to Phase 1.

After losing one third of his health, Sasquatch "called for help," which summoned two Gargantuars.

After beating Sasquatch, the player would receive a variation of the "Sasquatch's Cap" depending on the difficulty beaten (Standard, Enchanted, Scrumptious etc.), exclusive to Peashooter. 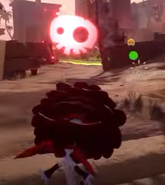 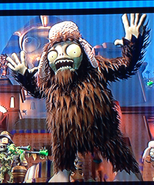 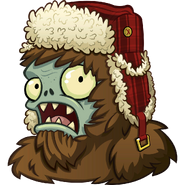 Sasquatch at the beginning of the boss fight

Sasquatch in the loading screen, along with two Sasquatch Imps, two Landscapers and three Camo Rangers