For the version in Plants vs. Zombies 2, see Sap-fling.

When played: Make a Sappy Place Environment.
He dates a lot of different branches, but nothing ever sticks.
Sap-Fling is an event plant card in Plants vs. Zombies Heroes and a member of the

. He does not have any traits, and his ability makes a Sappy Place on a selected lane when he is played. His closest zombie counterpart is Trapper Zombie.

He was added in update 1.16.10, along with Corn Dog, Clique Peas, Trapper Zombie, King of the Grill, Synchronized Swimmer, and the Galactic Gardens set.

He was available during the Super Sappy Week.

His description is a play on the word "stick." It could also allude to the word "fling" meaning "a short-lived relationship" as well.

He dates a lot of different branches, but nothing ever sticks.

At first, Sap-Fling may seem like a rip-off due to his low stats for 6

, but his ability to make an environment to take away 3

from all zombies in it makes this plant worth it. Sap-Fling's ability can also override a zombie environment and shut down the abilities of Kite Flyer, Zom-Bats, Vimpire, Space Ninja, and Space Cowboy if they are unboosted and untouched. Sap-Fling can also nullify the

Frenzy traits on zombies with 3

Rose has a great use of Sap-Fling. Playing him while Cosmoss is on the field will give Cosmoss +1

. Since Sappy Place lowers a zombie's strength, Rose can also use him with Whack-a-Zombie, Chomper, or Toadstool. Citron, likewise, can use Sap-Fling's ability in tandem with tough Team-Up plants like Wall-Nut so that his opponent cannot easily bypass his defenses. He can also protect Sap-Fling from damage with Root Wall or Peel Shield, or by playing the aforementioned Team-Up plants in front of him.

Sap-Fling is also quite effective at protecting plants that may be essential for your deck's synergy, such as Starch-Lord in the case of Citron or Beta-Carrotina, or Briar Rose in the case of Rose, as Sappy Place will significantly lower the strength of zombies so that it becomes harder for them to destroy the plant, provided they are on a ground lane.

will undo the ability of Sappy Place. You can also override Sappy Place with another environment, preferably cheap ones like Black Hole.

To destroy Sap-Fling, play instant-kill tricks like Rocket Science and Locust Swarm. Because of his low health, anything that does 3 or more damage, like Zombot's Wrath, can destroy him as well.

You can also punish your opponent for playing Sap-Fling due to the fact that he makes Sappy Place when he is played with Neutron Imp. Be careful when playing against Rose, as she can disable his bonus attack with Wing-Nut.

Do not Bounce Sap-Fling unless you need to, as your opponent can play Sap-Fling again and make another Sappy Place. 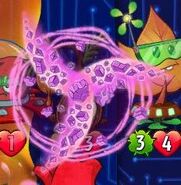 Cut Down to Size being played on Sap-Fling

Bungee Plumber being played on Sap-Fling

Sap-Fling tinted gray due to a glitch

Sap-Fling on the advertisement for the Weekly Events

Sap-Fling being the featured card in the menu for the July 4th, 2017 Daily Challenge

Sap-Fling being the featured card in the menu for the July 8th, 2017 Daily Challenge

Sap-Fling being the featured card in the menu for the July 20th, 2017 Daily Challenge
Add a photo to this gallery

Retrieved from "https://plantsvszombies.fandom.com/wiki/Sap-Fling_(PvZH)?oldid=2344042"
Community content is available under CC-BY-SA unless otherwise noted.