All-out war with the Plants is messy business. Thankfully, the Sanitation Expert is here to clean that mess up. It may not be glamorous (we don't pay him), but nothing beats a hard day's work and a job well done. Thanks Sanitation Expert!

His primary weapon is the Toxic Trash. It deals 35 (40 when upgraded) impact and critical damage and 18 splash damage in addition to continuous toxic damage to plants.

With the use of the Sonic Grenade, the Sanitation Expert is capable of doing lots of damage, both to single and groups of plants alike. Critical hits can do a lot of damage, so good aim pays off with this variant. This is one of those Engineers that is just as good at offense as it is at support. As long as you are within range of your opponent(s), You will continually be doing damage thanks to the Sanitation Expert's toxic aura. 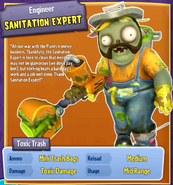 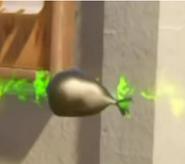 Sanitation Expert's projectile
Add a photo to this gallery

Retrieved from "https://plantsvszombies.fandom.com/wiki/Sanitation_Expert?oldid=2338989"
Community content is available under CC-BY-SA unless otherwise noted.