Super Rare
The S.H.R.Imp, or Ol' Shrimpy Boy as his friends call him, is actually the first (and only) member of Dr. Zomboss' Special Hydro Response Imp, or "S.H.R.Imp". Designed to combat all aquatic Plant life, this little guy may look ridiculous, but he means business.
S.H.R.IMP (Special Hydro Response Imp) is a Super Rare variant of the Imp in Plants vs. Zombies: Garden Warfare 2. He wears a pink clothing and a shrimp on his head. When he calls down his shrimp mech, he enters a giant robotic shrimp with the ability to create devastating water cyclones around itself or being able to jump high into the air and kick enemies from below. This variant was not available as an unlockable playable character in the beta, but the player could fight him in Flag of Power in Backyard Battleground. The S.H.R.IMP Mech lasts for 1 minute.

The Drake Mech and the S.H.R.IMP Mech are the only mechs that have double jumps.

His name is a pun on shrimp, a generic term for some decapod crustaceans, and Imp. It could also be a joke about how small Imps generally are.

The S.H.R.Imp, or Ol' Shrimpy Boy as his friends call him, is actually the first (and only) member of Dr. Zomboss' Special Hydro Response Imp, or "S.H.R.Imp". Designed to combat all aquatic Plant life, this little guy may look ridiculous, but he means business.

The S.H.R.IMP's primary weapon are called the Shrimpy Lasers. The Shrimpy Lasers fire slower than the Imp Blasters, but are more damaging (4-6 for impact damage and 6-7 for critical damage) and have less recoil. They fire approximately 30 shots before reloading.

The S.H.R.IMP Mech's primary weapon is called the Shrimpy Beam. It is similar to Citron's primary weapon, as it shoots out a beam that cools off if fired too long. The beam does 5-9 impact damage and 9-14 critical damage based on distance. It has infinite ammo and does not need to reload.

The S.H.R.IMP's primary weapon, the Shrimpy Lasers, deal more damage and suffer from less damage falloff than the normal Imp Blasters, which is useful for vanquishing some slower plants from further away, such as Cactus and Kernel Corn. However, the Shrimpy Lasers also suffer from a reduced clip size and slower firing speed, so playing with the S.H.R.IMP requires accuracy to be effective. The S.H.R.IMP Mech is also a very good way for racking up quick vanquishes from long range. This is because the Shrimpy Beam homes in on plants that are close enough to the targeting reticle, and the Water Cyclone can be used to get rid of plants, such as Citron or Kernel Corn, that can destroy the Z-Mech. The Shrimp Jump can be used in a similar fashion to the Pylon Imp's Drag Race, in which you can damage enemies with it or use it to escape. You can also use the Shrimp Jump to gain a height advantage, which is helpful for increasing your vanquish count while keeping you safe for a time. However, with the increased health, it's more common to attack enemies or to jump into gardens with the S.H.R.IMP Mech.

Bear in mind that while the S.H.R.IMP Mech has a health bonus of 50, you only have a minute to use it; 30 seconds less than the normal Z-Mech, so players should use the mech sparingly and use it for pushes with your team to capture gardens or rack up as much damage as possible. Water Cyclone is a great crowd control ability that allows you to push multiple plants off of the garden for a quick capture, while Shrimp Jump can be used to surprise the enemy with agility not usually expected from a Z-Mech. Also pressing the jump button when using the Shrimp Jump will make the mech jump much higher and further, but will not likely damage enemies when coming back down. As with the regular Imp, when all else fails, use your Explosive Escape to dish out a last bit of damage before retreating.

The S.H.R.IMP has the same health and normal abilities as a normal Imp, but his Shrimpy Lasers deal more damage than the Imp Blasters, so make sure to steer clear of its path of fire. His S.H.R.IMP Mech can be very problematic as its attacks are very powerful, but there are certain plants that can handle it. Citron is the best solution to dealing with the S.H.R.IMP Mech, as it can stun and damage with EMPeach and then blast away with powerful attacks. Kernel Corn is also a good solution, as a direct hit with Shuck Shot can possibly vanquish the S.H.R.IMP Mech in one hit if the mech is not at full health. If the primary weapon or Shuck Shot doesn't vanquish right away, then use Husk Hop then finish it off with your primary weapon. 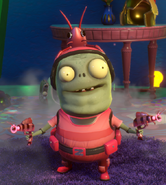 S.H.R.IMP in the Customization Booth 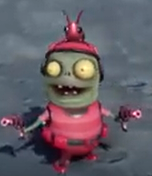