watch 02:43
Introducing Rux Plants vs. Zombies Garden Warfare 2 Live From PopCap
Do you like this video?

Rux's Bazaar is a shop that was added in the Trials of Gnomus DLC in Plants vs. Zombies: Garden Warfare 2. It is owned by Rux and if the player speaks to him, he will show customization items and gestures in his shop that are available to buy items by purchasing coins. Five items are available to purchase each time the Bazaar is open. The things Rux sells in his shop involves:

As of the September 2018 update, Rux's Bazaar is both in the plant and zombie base, near the World Hub. Rux's Bazaar was originally located inside the sewers under the Backyard Battleground, near the entrance to the grate that leads to the Chamber of Gnomes, now it is still there but appears to be closed. It will only be open for a limited time.

Nearly every time Rux appears, he sells an exclusive ability that can only be purchased through him. This is a list of all the abilities Rux has sold in order of release;

Rux in the Plant base 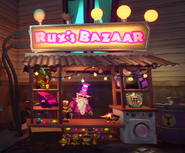 Rux in the Zombie base
Add a photo to this gallery

Retrieved from "https://plantsvszombies.fandom.com/wiki/Rux%27s_Bazaar?oldid=2334925"
Community content is available under CC-BY-SA unless otherwise noted.