Rare
The Rugby Star dreams of being permanently stuck in a scrum. It's the closest thing he's found to the smell of Brainz.

The Rugby Star dreams of being permanently stuck in a scrum. It's the closest thing he's found to the smell of Brainz.

The explosive Rapid Fire Rugby Launcher will make you the envy of your next scrum.

Rugby Star uses the Rapid Fire Rugby Launcher as his primary weapon, which deals 9 to 14 critical damage, depending on range. It has a lower fire rate than the All-Star's primary weapon but deals splash damage.

Before the Legends of the Lawn DLC, it dealt 7 to 12 damage depending on range.

A supply of rugby balls has been received - what good fortune!

These scrum-tested rugby balls are quite good and will help deal extra damage.

Rugby Star is suitable for players who lack good aim. The splash damage can make up for misses and allows you to practice aiming for body and headshots while still contributing to the damage dealt. He also fires straight and is accurate due to his detailed crosshair, making him one of the more competent All-Stars at range.

When in the hands of a more skilled player, the splash damage can be put to good use with three things: 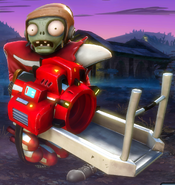 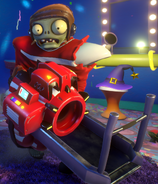 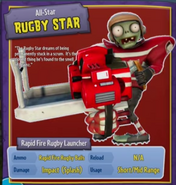