Not to be confused with Rotten Red.

Rubies can bounce randomly after hitting a zombie.

Gem merchants are the most powerful plants around. Many of the local big name zombies are willing to paint for them. Gem merchants are more than happy to pay them compensation. The payment method used doesn't involve barcodes however, instead they're "payed" rather directly with gems.

Ruby Red (宝石商石榴; pinyin: bǎoshí shāng shíliu) is a plant obtained in Renaissance Age in the Chinese version of Plants vs. Zombies 2. It is a lobbed-shot plant that fires rubies at zombies. Rubies fired by Ruby Red bounce back diagonally after hitting a zombie, in a similar fashion to Plumping Plummy.

It is based on the pomegranate, a fruit-bearing deciduous shrub or small tree.

Ruby Red gets its name from the pomegranate cultivar of the same name, the Ruby Red Pomegranate, referencing the projectiles that it shoots.

When given Plant Food, Ruby Red launches a large volley of rubies at various different zombies.

Ruby Red is great when dealing with large groups of weak zombies. One plant can take control of several lanes, similar to Bowling Bulb. Level upgrades further solidify this idea.

Player should bring heavy hitter plants on the level with high-health threats. It's also not recommended to use Ruby Red as main attacking plant as his recharge is long.

Ruby Red is a good choice when dealing with Barrel Roller Zombie or Shield Zombie, as his rubies can attack them behind their shields. 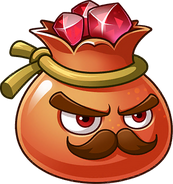 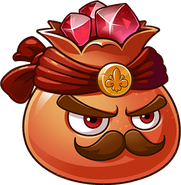 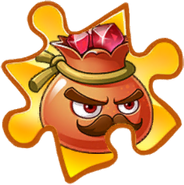 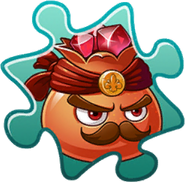 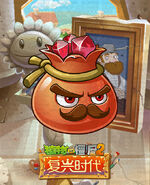 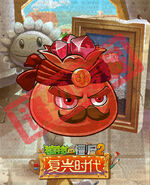 Dancing Ruby Red
Add a photo to this gallery

Retrieved from "https://plantsvszombies.fandom.com/wiki/Ruby_Red?oldid=2360660"
Community content is available under CC-BY-SA unless otherwise noted.