Hypno Vine Whip
Hypno Tether
Hypno Aid
Super Goatify
Royal Hypno-Flower (known as Hypno Sunflower Queen in Battle for Neighborville) is a boss plant introduced in Plants vs. Zombies: Garden Warfare 2. She is encountered as the final boss of the zombie missions in Special Ops and one of the bosses in Boss Hunt.

She also reappears as a boss in Graveyard Ops in Plants vs. Zombies: Battle for Neighborville, with her health being lowered in order to fit in with the other bosses. She has also been renamed to "Hypno Sunflower Queen".

Hypno Spores: The Royal Hypno-Flower's main attack, where she fires pink blasts that explode on impact, dealing damage. This attack leaves a harmful cloud of spores on impact, similar to the Alien Flower's (the Sunflower variant that this boss is based on) primary attack and noticeably "ripples" the area around the site of impact, making it harder to see through the targeted area.

Like Captain Smasher, Royal Hypno-Flower relies on her ability to stop the zombies from damaging her, and making them more vulnerable. In the hunt, she can normally do this three times. As a zombie, you need to damage her heavily. Super Brainz (preferably Electro Brainz), Scientist (preferably Marine Biologist), All-Star (preferably Tennis Star), and Captain Deadbeard are recommended and are a great team to defeat her. Super Brainz and All-Star have more health and can deal good damage, Scientist to heal, and Captain Deadbeard can snipe Hypno-shrooms and Shadow Flowers from afar. Be warned however, as Royal Hypno-Flower has attacks identical to the aforementioned characters' primary weapons.

When the Royal Hypno-Flower has lost 25%, 50% and 75% of its health, it will charge up its "Super-Goatify" attack. At this point, the Royal Hypno-Flower will unveil its weak spot near its stem base. This spot allows more damage to be taken (for example, a Marine Biologist with a damage upgrade will do 61 damage to it opposed to 50). When it fires she will turn the whole team into Stinky Goats, even Z-Mechs. It is ideal to use Super Brainz or All-Star to go eat the Poly Leaf because the player's health is transferred to the goat. If any allies were KO'ed during this time, they will be revived once the spell is removed, so reviving teammates isn't a priority in this segment.

Also be mindful, as with the Sunflower Queen, AI Sunflowers have a tendency to prioritize the Royal Hypno-Flower when choosing who to heal, meaning that they can restore a fair chunk of her health if not dealt with. 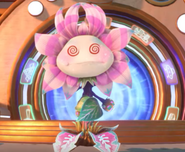 Concept model renders in Plants vs. Zombies: Battle for Neighborville