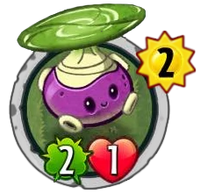 For the version in Plants vs. Zombies 2, see Rotobaga.

This attacks both lanes next door instead of this lane.
Without flying roots, how would we get Sky-Trees??
Rotobaga is a triassic super-rare plant card in Plants vs. Zombies Heroes and a member of the

. It has the Amphibious trait, and its ability allows it to attack on the lanes adjacent to it, but not on the lane it is on.

Without flying roots, how would we get Sky-Trees??

Rotobaga can be treated like a cheaper, but much weaker version of Threepeater, Tricorn, and Shooting Starfruit. However, it can dish out some big damage on turn 2, having the potential to do up to 4 damage at once if not blocked. Because it attacks on other lanes, you can use this to destroy a fragile zombie on its right before it gets to attack. It is especially useful against cards like Fire Rooster and Arm Wrestler, as you can avoid activating their abilities by playing this on an adjacent lane.

Because it is a root, you can boost its stats with Starch-Lord, although only Citron and Beta-Carrotina can do this normally. You can also use Navy Bean to boost its stats because of its Amphibious trait, but it is hard to keep Rotobaga alive until turn 4. However, Green Shadow's and Nightcap's boosting cards are more efficient if you want to boost Rotobaga alone.

But despite its uses, Rotobaga does have several weaknesses. The first weakness is its low health of 1, which makes Rotobaga fall from the weakest of zombies and tricks. Also, despite its Amphibious trait, playing it on an aquatic lane hinders its offensive power (assuming the aquatic lane is the rightmost lane), which is detrimental for a plant whose value mostly depends on it. But perhaps the biggest drawback of Rotobaga is the inability to defend its own lane, requiring support from other plants to do so. While it isn't a problem if the lane is empty, it definitely is in the case of the opposite. The most universal way to deal with this weakness is by using Bouncing cards such as Jumping Bean or Spring Bean.

Because it is fragile, something that can do 1 damage like Conga Zombie or reduce stats like Nibble can easily take it out unless it has been boosted. Rolling Stone works too because of its low strength. If boosted, something like Rocket Science or Locust Swarm can destroy it.

You do not have to worry about it being on the aquatic lane, as your opponent will tend to not play it there due to it cutting down Rotobaga's power by half. 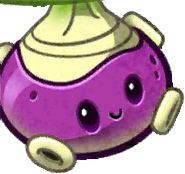 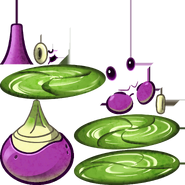 Nibble being used on Rotobaga

Rotobaga about to attack from the player's point of view

Rotobaga attacking from the player's point of view

Rotobaga about to attack from the opponent's point of view

Grape Responsibility being used on Rotobaga

Rotobaga Fused with Lily Pad
Add a photo to this gallery

Retrieved from "https://plantsvszombies.fandom.com/wiki/Rotobaga_(PvZH)?oldid=2324384"
Community content is available under CC-BY-SA unless otherwise noted.