For the version in Plants vs. Zombies: Garden Warfare 2, see Rose. 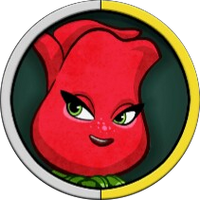 Rose is a plant hero in Plants vs. Zombies Heroes and the leader of the

She is based on the plant class in Plants vs. Zombies: Garden Warfare 2 with the same name and appearance.

Refuses to be nerfed.

Rose controls the Zombie side with chilling Freeze effects which power up her Snowdrop to massive size.

Rose is all about taking control of the battle. She can outsmart the zombie hero and ruin their strategies to give her time to set up her defense. This way she will be able to protect her sun-generating plants so she can play powerful plants early, destroy any threats, and be on the offensive in the late game.

Rose can use the

Freeze and Bounce abilities from the Smarty class to her advantage to protect plants from zombie attacks. She is also capable of weakening zombie fighters significantly, which she does with Transmogrify, and most notably, Goatify. Due to her Solar class, Rose can get more sun quickly, which allows her to completely suppress the opponent with clever tactics such as healing herself and playing Template:PvZHLink early.

With access to more flowers than any other plant hero (tied with Wall-Knight), Rose has one of the greatest flower synergies around. The Solar class sure gives her access to most flowers, but the Smarty class also provides many useful flowers. There are useful examples like Mayflower, Go-Nuts, Spyris, and Template:PvZHLink. While these flowers are a bit frail, Rose has stalling tricks up her sleeve to protect them well.

As a result of her overall strategy, Rose focuses on tactics too much, and not so much on direct offense or defense. Many of her plants have below average stats. If the opponent manages to outfox her, outlast her, or overwhelm her, she can get in a tight spot, and there is not much she can do. The fact that she lacks boosting tricks does not help at all, so the only way for her to deal with tough zombies is to use tricks to stall them or outright destroy them. Her greatest weakness, however, is her lack of reliable card draw. Fortunately, to make up for it, she can use cards like Sage Sage, 2nd-Best Taco of All Time, and especially Planet of the Grapes.

Always be one step ahead of her. Destroy any problematic plants like Pepper M.D., Snowdrop, and Heartichoke early so you don't end up in an unfavorable situation. It is also advisable to counter her tricks so she cannot take advantage over you. If you cannot nullify her tricks, then she will end up controlling the game and leading you away from victory. Make sure you overwhelm her. You can try spamming cheap zombies to stress her into stalling them, although be warned, as Rose does have her share of cheap cards like Morning Glory and Cosmoss. As mentioned before, her greatest weakness is her low card draw, so if she wastes all her cards, you can use this to your advantage to turn the tide of the battle, so as to outsmart her.

Remember that just like Wall-Knight, Rose is able to destroy any zombies she chooses to. Her Winter Squash + Cool Bean combo means not even Gravestone zombies are safe from being destroyed easily. As such, swarm the field with zombies that are equally dangerous and make sure all your zombies have a chance to hit her.

Power of the Flowers

This is Rose's flower deck. If you cannot get rid of the early Sunflowers, Rose will be able to gather enough sun to play either a Cornucopia or a Dark Matter Dragonfruit, basically sealing your defeat. Use damaging tricks, abilities, and environments to destroy any Sunflowers played on the field.

Freeze deck. If you recklessly just play zombies, Rose will be able to easily

Freeze your zombies to boost her Snowdrops and destroy them with Winter Squash. Brainy heroes are best suited against this deck as they can play zombies during the Zombie Tricks phase and granting them immunity to freezing for that turn, or thaw already frozen ones with bonus attack cards.

This deck is about controlling the early game for late-game domination. Try to take out any sun producers and counter setup tricks to slow down and delay any control attempts Rose may pull out.

This is Rose's environment deck. You need to be able to replace her environments with your own, otherwise she will basically be able to defeat you with a Shooting Starfruit or Astrocado. Use Rustbolt as he can destroy Cosmoss with Rolling Stone and Weed Spray if unboosted, or Rocket Science if boosted twice. He can also play cheap environments to replace Rose's, but Huge-Gigantacus is better in that aspect due to his access to 1-brain environments like Graveyard, Ice Moon, and Teleportation Station.

This is Rose's Colossal Fossils deck with an emphasis on control and Team-Up synergy with ramp support. Rose will first generate sun with her Sunflowers and Solar Winds, try to go for a powerful Team-Up synergy with Go-Nuts, Mixed Nuts, and Laser Cattail, then destroy your early zombies with Template:PvZHLink and wreak havoc on groups of zombies with Template:PvZHLink's abilities to allow the Cob Cannons to hit you directly. This deck also has other means of indirect removal via Whack-a-Zombie, Lawnmower, Squash, and Kernel-Pult. However, this deck requires heavy setup, so you should try to ruin that.

Professor Brainstorm is the best hero to counter this deck as he has access to field-clearers like Barrel of Deadbeards, Fireworks Zombie, and Gizzard Lizard to easily wipe out or damage many of her plants, Rocket Science for Cob Cannons, and cards like Beam Me Up and Teleportation Zombie to shut down Solar Winds and protect his zombies from instant-kills..

Retrieved from "https://plantsvszombies.fandom.com/wiki/Rose_(PvZH)?oldid=2183883"
Community content is available under CC-BY-SA unless otherwise noted.