Hover in the air by holding [Jump]

Roses support the plants with boosts to speed and damage. Their Goatify spell is great at making enemies scatter.

Rose is a playable plant class in Plants vs. Zombies: Battle for Neighborville. She is a

Support class who specializes in buffing the stats of ally plants, increasing the damage dealt by ally fire through Jinx, as well as increasing mobility speed through Arcane Enigma.

Roses support the plants with boosts to speed and damage. Their Goatify spell is great at making enemies scatter.

Rose's primary weapon are the Magic Thistles, magical homing missiles which fire from her wand. Each missile deals 12 damage (15 critical) at a rate of 200 RPM (rounds per minute). Rose can fire 20 rounds before having to reload.

If the Rose has the legendary upgrade, Thorn Apart, equipped, Rose's secondary weapon is the Thorn Apart, which fires orbs when you press [zoom], replacing the normal zoom feature. Each orb deals 25 damage and you can have up to 5. You can speed up how fast you gain orbs by vanquishing Jinxed enemies, speeding up allies with Arcane Enigma, and goatifying zombies with Goatify. You will lose any and all orbs collected when you're vanquished.

As Rose, it is recommended to stay at the edge of the fight, as Rose isn't best suited for close quarters combat, and her thistles won't home on to enemies if she goes too far out of range. As Rose is a

Support class, it would be wise to stick near your team and to provide necessary stat buffing, using Arcane Enigma to assist your team in reaching objective points, or to flee from enemies when low on health. Goatify is best used on large clusters of enemies, causing them to scatter and clearing out the area for the plant team to occupy or advance through. It is recommended to use Jinx on stronger, tankier enemies such as Super Brainz or All-Star to aid your team in vanquishing them due to their high amounts of health.

Rose has low health, so she can be vanquished quite quickly. If she goes into Arcane Enigma, follow her so you can vanquish her later. If you get Jinxed, try to hide until the Jinx wears off. If the Rose uses a Goatify, stay on the edges of the Goatify so you don't fully transform but are still able to attack the Rose.

Rose is best at mid-range, so close-ranged chracters like Scientist and Super Brainz are deadly against her. They can kill her quickly so she won't have time to go into Arcane Enigma. It is recommended that you don't play the Imp, as her Magic Thistles will home in on them. Captain Deadbeard's Parrot Pal is also not the best choice as she can home in on them as well. 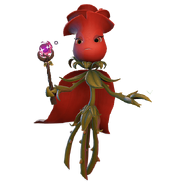 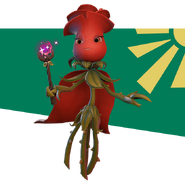 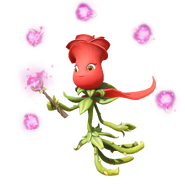 The icon for Rose's Legendary Upgrade: Thorn Apart
Add a photo to this gallery

Retrieved from "https://plantsvszombies.fandom.com/wiki/Rose_(PvZ:_BfN)?oldid=2288947"
Community content is available under CC-BY-SA unless otherwise noted.