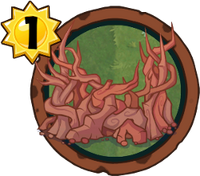 and can't be hurt this turn.
A good way to root for the Plants.
Root Wall is a super-rare plant superpower trick card in Plants vs. Zombies Heroes and a member of the

to play, and its ability is to shield a selected plant for the turn it is played, and gives it +2

A good way to root for the Plants.

It is based on a wall, albeit one made out of roots.

Its description makes use of the double meaning of the word "root." One meaning is "to cheer for," while the other is "the roots of a plant that are used to get water and nutrients," which is the material this wall is made of.

This trick is used to shield a plant you do not want to lose or be damaged. You can use this with Soul Patch for guaranteed invincibility on that turn unless your opponent destroys him with a trick. Grass Knuckles can play this to protect a plant that needs setting up like Pea Pod or Doubled Mint. This can also be used for plants with high strength and low health like Carrotillery and Shooting Starfruit.

If you get this from a Super-Block in the Fight! phase, it is not recommended to use this unless there is a valuable plant that is about to be destroyed, or Soul Patch is on the field (only when you need to survive another turn), as the shielded effect will wear off at the end of the phase.

Avoid using this on plants that rely on "When hurt" or "When destroyed" abilities as they won't activate.

When you are fighting Citron or Grass Knuckles, you need to be careful as the plant is unable to be hurt by regular damage. Fortunately, it does not prevent instant-kill, stat-lowering, or Bouncing cards from removing that plant. Hence, unless the target is dangerous or is a priority in being removed, you can play Sumo Wrestler, Rodeo Gargantuar, or Terrify to move the protected plant out of the zombie's way.

Note that it only increases the health and not the strength, so playing tricks like Shrink Ray and Nibble or playing Landscaper to make the plant do no damage also works, making your zombies unable to attack the plant, but also making that plant unable to attack your zombies as well. If it was used on a plant that has taken damage beforehand, you can destroy it with Evaporate in order to protect a powerful zombie from getting destroyed. 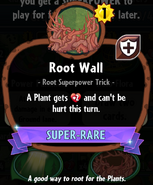 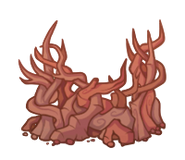 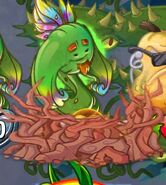 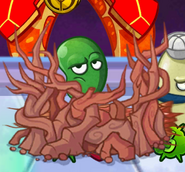 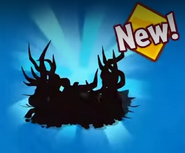 The player receiving Root Wall from a Premium Pack