Not to be confused with Shield Zombie.

Arrives in a group of three zombies or less. Certain zombies carry their shields above their heads.

Penny's Pursuit - Rome Invades! - Level 2
The shield protects him from bad reviews and hurtful remarks.
Roman Shield Zombies are zombies that will appear in groups of two to three zombies, carrying shields in front of them or above their heads. They are encountered only in the mode Penny's Pursuit. They behave quite similar to the Camel Zombies encountered in Ancient Egypt, but the Roman Shield Zombies have more health. Some Roman Shield Zombies appear carrying shields over their heads instead, blocking all lobbed projectiles in a similar manner to Surfer Zombie.

The shield protects him from bad reviews and hurtful remarks.

This zombie acts similarly as Camel Zombies when he's not raising up his shield. You can use Bloomerangs to damaging them once they're two or three zombies.

When he's raising up his shield, he's acting similarly to Surfer Zombie and Parasol Zombie, which is blocking any lobbed-shot projectiles. In these instances, use straight shooting plants such as Repeater, Red Stinger, or Snow Pea. 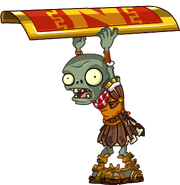 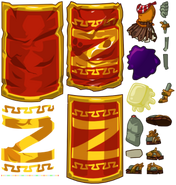 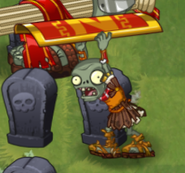 Roman Shield Zombie with his shield down

A glowing Roman Shield Zombie with his shield down