Rodeo Legend Zombie is a zombie that appears in the Wild West expansion in Plants vs. Zombies 2. It is the upgraded version of Zombie Bull. Unlike Zombie Bull, it runs faster and rams into the first plant it meets, either heavily damaging that plant or instantly destroying it. After that, it will charge again after 4 seconds. However, like Zombie Bull, it can be stunned by an E.M.Peach to give the player more time to deal with it.

It is recommended to use Kernel-pult, Iceberg Lettuce, Stunion or E.M.Peach to stun the Rodeo Legend Zombie before it launches its Zombie Bull Rider as it can damage a plant during this attempt as well. Plants such as Pea Pod (with 5 heads), Torchwood (with peashooting plants), Melon-pult, Winter Melon, Grapeshot, Electric Peashooter and Bowling Bulbs can assist in dealing high damage to this zombie.

Sacrificial plants such as Puff-shroom or Sun-shroom can be good as a primary staller for this zombie. However, when they come in groups, such as in Wild West - Day 33, they may be overwhelmed since they have to recharge. Spore-shrooms are also effective when this zombie appears with some other zombies as they will create a new Spore-shroom which will stall it, even when charging towards your plants. Infi-nut's Plant Food effect can be used to block this zombie.

Spring Bean or Chard Guard are good choices, since it can bounce back this zombie when he is charging and stop it. However, the Spring Bean must be awake for this to work. Using it with Blover is also a good idea. Primal Peashooters can push back the Rodeo Legend Zombie when it charges towards your plants. Rodeo Legend Zombie will not attack Ghost Pepper or any underground plants such as Spikeweed, Spikerock, Cactus and Celery Stalker. Due to this, these plants are a good way to defeat these zombies. Guacodiles, Lava Guava, Explode-o-nuts or Hot Date are also useful against the zombie as they will trigger the attacks instead of destroying these plants, greatly damaging it.

Note: Bonk Choys, Snapdragons, Phat Beets and Cold Snapdragons are useless (unless fed with Plant Food) as they can only attack from a very short range. While the Rodeo Legend Zombie is charging, avoid placing these plants near it as they will hardly damage it and will easily get destroyed. Homing Thistles are also useless as they can easily be distracted by other zombies, especially if Chicken Wrangler Zombies, Prospector Zombies or Pianist Zombies (with other Cowboy Zombies) appear and therefore, they will have a hard time trying to take this zombie out. Citrons are also ineffective against it unless fed with Plant Food as they fire very slowly compared to other plants and these zombies are very fast, and the increased damage will not be enough to fend them off. Nightshades without Plant Food are not useful either because they have too low of a range when not powered and regenerate projectiles too slowly when powered. Chompers and Toadstools are also a very bad idea as they cannot devour the Rodeo Legend Zombies and will only attack them while they can easily destroy your Chompers and Toadstools. In addition, using Plant Food on these plants against this zombie is also useless. Also, avoid using Parsnip against it as, unlike Guacodile, it will destroy it without making it rush.

A combination of Rodeo Legend Zombies and Wild West Gargantuars can be very threatening as they both have high health, move very fast, and have Zombie Bull Riders that can easily cause huge problems if thrown to your backmost defenses. To prevent this, you should keep at least a Blover or Hurrikale at your disposal. All normal instant kill plants except Chili Bean, Primal Potato Mine, or possibly Grapeshot may require at least two strikes to kill the Rodeo Legend Zombie itself. Stalling or delaying them with Primal Peashooters, Apple Mortars, Kernel-pult and other plants with offensive and immobilizing powers may be required. Shrinking Violet is also useful as this prevents them from launching their Zombie Bull Riders and gives Jack O' Lantern, Banana Launcher and Missile Toe the ability to kill the Rodeo Legend Zombie instantly. 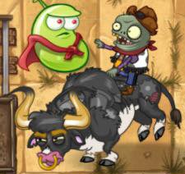 Retrieved from "https://plantsvszombies.fandom.com/wiki/Rodeo_Legend_Zombie?oldid=1961218"
Community content is available under CC-BY-SA unless otherwise noted.