Not to be confused with the Wild West Gargantuar. 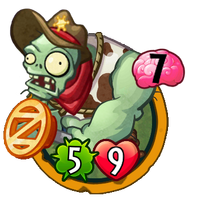 When revealed: Move a Plant.
Why yes, this IS his first rodeo.
Rodeo Gargantuar is a premium rare zombie card in Plants vs. Zombies Heroes and a member of the

. He has the Gravestone trait, and his ability moves a selected plant onto a selected lane when he is revealed. His closest plant counterpart is Whipvine.

He is based on Wild West Gargantuar, and also partially based on Sheriff Gargantuar as well.

His description may refer to the expression "It's not my first rodeo."

Why yes, this IS his first rodeo.

Rodeo Gargantuar is basically a Sumo Wrestler with increased stats and the added Gargantuar tribe. And just like Sumo Wrestler, his ability can be used to reposition plants onto unfavorable positions. However, this does not mean he can completely substitute Sumo Wrestler; due to him being much more expensive, Rodeo Gargantuar cannot be easily played any time you need to move a plant, unlike the former. You have to make use of his high stats (which, although only average, is pretty decent) and tribe synergy to allow him to differentiate from his cheaper version.

All Hearty heroes can use Zombie Coach to shield him, as well as Team Mascot to boost his stats due to him being a sports zombie. They also have access to Gargologist, who will allow Rodeo Gargantuar to be played much earlier.

The Smash and Neptuna can both play Possessed on Rodeo Gargantuar, which will give him

If you notice a Hearty hero playing only one gravestone and nothing else late-game, there is a chance that they have played Rodeo Gargantuar. If you manage to remove him while still in his gravestone via anti-gravestone cards like Grave Buster, your opponent may not be able to do anything since they will probably have spent all their brains on playing Rodeo Gargantuar.

If Rodeo Gargantuar gets on the field, dealing with him in combat will not be easy due to his immense health and plant-moving ability. If you don't have instant-kills to instantly finish him off, try making the job easier by lowering his stats or strategizing and determining potential spots where your opponent will move the plant. For example, if there are only two empty lanes, you can play a strong plant on Rodeo Gargantuar's lane to force him to move it to an empty lane, where it can hurt your opponent a lot. (Depending on the plant, the aquatic lane may or may not count.) However, keep track of plants that have the Team-Up trait; since they allow another plant to be on their lane, lanes with such plants count as empty lanes.

The hero you should watch out for the most would be The Smash, as his Beastly cards synergize well with Rodeo Gargantuar. If you see any Smashing Gargantuars, Supernova Gargantuars or Kings of the Grill on the field, you will have to take them out one by one before they can finish you off. Play Doom-Shroom to shut them down.