Fast, then slow (after losing rocket)

5 minutes
Rocket Zombie ain't got time for this. He ain’t got time for that. He does, however, have time for differential calculus.
Rocket Zombie was a zombie that appeared in Plants vs. Zombies Adventures. He travels faster than most other zombies and has higher toughness while he has his rocket. He does not eat other plants while using his rocket, unless he is blocked. However, once the rocket is destroyed, he travels at normal speed and has slightly higher toughness than a regular Zombie. The rocket instantly goes away if he is hit with a Chilly Pepper, Snow Pea's, or Ice Queen Pea's projectile.

He is named after the rocket, a missile, spacecraft, aircraft or other vehicle that obtains thrust from a rocket engine, specifically the one tied to his head.

His original name was "Zoombie" on release day and the trailer. However, during the open beta and in the latest version of the game, he was renamed to Rocket Zombie. The name "Zoombie" is a portmanteau of the words "zoom," referring to his speed and "Zombie".

His appearance could be based on the famous physicist Albert Einstein.

Rocket Zombies make a noise when they enter the battle that sounds like a rocket going off. This helps to notify the player about the zombie and to urge the player to prepare their defenses against the zombie. Given the fact that the Snow Pea is given to the player before getting to Killjoy Park Level 1, the first level the zombie appears in, it can easily be used against him during the levels he appears in. Both being slowed down and having his health reduced to that of a regular Zombie will greatly help the player, as the zombie's threat lowers to that of a regular Zombie, which is not much.

If Snow Peas are out of the option, such as busy attacking other zombies, using ZombiFreeze on this zombie until he dies is suggested. Cherry Bombs or Jalapeños will also solve the problem, but the long harvest time for either makes excessive use a bad idea. Zombie Zappers can be used on large groups of Rocket Zombies to help defenses even with sufficient Snow Peas kill these zombies.

When attacking other towns, Rocket Zombies can be very useful if the player speed them up with Zombie Fog. This causes them to go extremely fast, while avoiding attacking plants so the player can get to the player's house quickly. However, Wall-nuts can stop this from happening.

A Rocket Zombie without his rocket (also slowed down)

Rocket Zombie with his rocket in-game 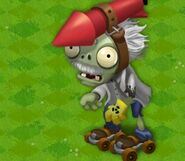 A Rocket Zombie standing in game 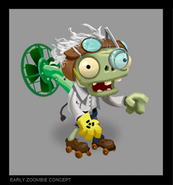 A concept design for the Rocket Zombie

Rocket Zombie's trash
Add a photo to this gallery

Retrieved from "https://plantsvszombies.fandom.com/wiki/Rocket_Zombie?oldid=2327915"
Community content is available under CC-BY-SA unless otherwise noted.