Plants vs. Zombies Wiki
Register
Don't have an account?
Sign In
Advertisement
in: Under construction, Zombies, Backbiter Zombies,
and 5 more

For the version in Plants vs. Zombies Adventures, see Rocket Zombie.

Rocket Scientist is a Workshop Zombie in Plants vs. Zombies 3, whom you first encounter at Floor 9 of Devour Tower. Upon reaching the seventh column, he launches over plants to the farthest column in order to attack from behind.

He is based on the Rocket Zombie in Plants vs. Zombies Adventures.

Rocket Scientist is easy to deal with if you have plants that attack backwards, like Starfruit for example. However, as the game goes on in Devour Tower, he gets stronger.

He can be difficult to deal with at times, but mostly because of the player not having any plants that deal with backbiters. The player can prevent this from happening by planting on the eighth column, preventing him from rocketing to the back column. 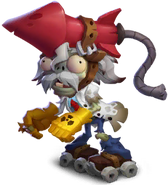