N/A
Special (Bling Pylon)
When the going gets tough, summon your massive Z-Mech to even the score, and then some.

61 sec. (initial)
90 sec. (subsequent)
Call in a powerful mech to control for a limited time.
Robo Call is an ability for the Imp in Plants vs. Zombies: Garden Warfare 2 and Plants vs. Zombies: Battle for Neighborville. When used, the Imp will use his walkie-talkie to summon the respective Z-Mech for that variant which will fall from the sky. The Imp will enter the Z-Mech and trade his usual abilities and weapons for greatly increased health and new abilities. This is a common ability shared by all Imp variants.

When the going gets tough, summon your massive Z-Mech to even the score, and then some.

If those pesky Plants aren't respecting your Pylon Mech, this blinged out upgrade is for you. Loaded to the brim with gems and diamonds, you'll be the center of attention for sure!

Call in a powerful mech to control for a limited time.

Robo Call is the regular call variant for the Imp. After calling with his walkie talkie, the Z-Mech will fall onto the Imp and grab him and the Imp will be able to roam with his Z-Mech.

Associated upgrade  (Battle for Neighborville only)

When Activating this ability, be aware of your surroundings as any chompers could swallow you mid call (instantly reseting your mech ability). This counts as a Mech kill for the chomper, and also forces you to wait an extended period of time before you can summon it again.

Try to activate this ability when you are pushing an objective (best activated on rooftops where chompers can't swallow you). 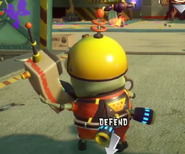 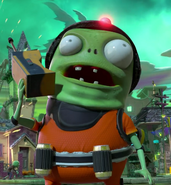 Robo Call as seen in the trailer