Not to be confused with another zombie of a similar name from Plants vs. Zombies 2, Robo-Cone Zombie.

The Robo Zombie typically uses a short-ranged weapon and a long-ranged weapon, making it comparable to that of Super Brainz.

Heavy Punch deals 30 area damage, involving Robo-Zombie spinning on the spot. Plants hit with this attack have knockback damage dealt to them.

Abilities  (Battle for Neighborville only)

If the player gets a "Super Robot Wave" in Garden Ops, composed of 3 Mech Gargantuar boss icons, then Robo-Zombies and some Computer Scientists will back up the bosses, making up the entirety of super boss wave.

The best case scenario for dealing with this character is to use a character with range, such as Cactus and her variants. Use higher ground and attack it, as its ranged attacks can be easily dodged and its melee attacks will be incapable of damaging you. 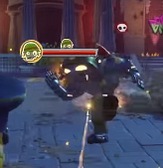 A Robo-Zombie about to explode after being vanquished

Party Corn getting a "Robo Assault" special wave, which is all Robo-Zombies

Party Corn taking on a couple of Robo-Zombies

Electro Pea taking on a Robo-Zombie, a Computer Scientist, and a Mech Gargantuar

A team knocked out by a "Super Robot Wave"