Shadow plants (When powered by

"You have the right to remain silent, but what you say will become evidence in court!" He is always practicing this warning in front of the mirror. Since he graduated from the police academy, he has wanted to use this sentence for a long time.

Riot Police Zombie (防爆警察僵尸; pinyin: fángbào jǐngchá jiāngshī), is a zombie encountered in Modern Day in the Chinese version of Plants vs. Zombies 2.

At regular intervals, he will stop and throw a smoke bomb at the closest plant in the row he is in, covering it in white smoke and completely disabling it, similarly to Wizard Zombie. The smoke has a limited duration, and can be removed with Blover or Hurrikale. He will continue until all plants in his row are disabled. He will also use his baton to destroy plants instantly like the Swordsman Zombie and Gargantuar. Shadow Plants powered by Moonflower and Torchwood are immune to smoke grenades.

He is based on the riot police, who are organized, deployed, trained or equipped to confront crowds, protests or riots. His smoke grenade attack is a reference to how real-life riot police officers tackle rioters with tear gas to disable them, and his melee attack refers to how the officer engages rioters at melee range, as they are not supposed to use firearms. 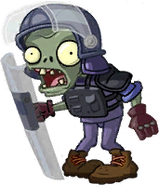 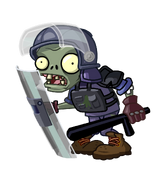 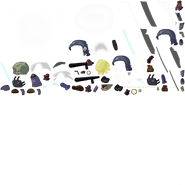 Destroying a disabled Chard Guard with his baton

Almanac entry
Add a photo to this gallery

Retrieved from "https://plantsvszombies.fandom.com/wiki/Riot_Police_Zombie?oldid=2373203"
Community content is available under CC-BY-SA unless otherwise noted.