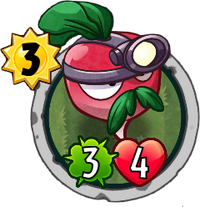 When played: Bounce another Plant.
He puts the rad in radish.
Rescue Radish is a premium uncommon plant card in Plants vs. Zombies Heroes and a member of the

. He does not have any traits, and his ability gives a plant on the field the Bounce effect, excluding him, when he is played. His closest zombie counterpart is Firefighter.

He is based on a radish, an edible vegetable root of the Brassicaceae family, and a rescue worker, a person working at the EMS.

His name is a combination of the words "rescue," referring to his ability, and "radish," the real-life plant he is based on.

His card description makes a pun on "rad," an old slang word from around the 80s or 90s, meaning "cool" or "wonderful," referring to how it can be heard in "radish."

He puts the rad in radish.

Rescue Radish, like his name states, can be played to save a valuable plant from destruction by Bouncing it back into your hand. He can also be used to Bounce a plant with a "When played" ability like Kernel Corn or Astro Vera so that you can reactivate its ability. However, take note that you are forced to Bounce another plant when you play Rescue Radish, so you should not play him if the only plants on the field are either boosted ones or those that are facing dangerous zombies.

As Rescue Radish is a root, you can also use him in tandem with Starch-Lord to give him a small boost. However, only Citron and Beta-Carrotina can do this normally. For a more universal combination, there is Jelly Bean, who will get boosted if Rescue Radish activates his ability. Don't bounce the Jelly Bean though, as its stats will get reset. However, if you have another Bean ready for evolution and you want to bounce another Zombie, this could be considered.

Rescue Radish can be difficult to destroy early on as he has a good amount of health. His ability can also foil your plans and help your opponent, making Rescue Radish both dangerous and annoying. A cheap zombie that has high strength such as Cuckoo Zombie or Tennis Champ can easily destroy Rescue Radish. However, both zombies will be destroyed after they destroy Rescue Radish unless they hit him with a bonus attack.