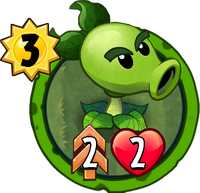 For other uses, see Repeater (disambiguation).

Double Strike trait and does not have any abilities.

Its description is a reference to its Almanac entry in Plants vs. Zombies 2, where Repeater repeats sentences it said before.

Repeater is a fragile but potentially rewarding offensive plant. Its main strength lies in its bonus attack after surviving combat, which can double the value of any offensive boost attached to it. However, this also means that any opposing zombie with

Armored will take less damage, as the trait will apply to both attacks.

As demonstrated in the tutorial, Repeater behind a Torchwood is a good combination and can cause a lot of damage to whatever is in front, giving Repeater extra protection from most zombies and more damage. Playing Repeater while The Podfather is on the field will boost Repeater by +2

, which is also a powerful combination. Basically, boosting its strength is a good idea unless your opponent has Rocket Science or Cut Down to Size.

Because of its trait, Party Thyme can be used in conjunction with Repeater to set up a draw engine and get additional cards. Bananasaurus Rex can be added on top of that, getting a boost every time Repeater does a bonus attack.

It is not recommended to play it when Bonus Track Buckethead or Gargantuar Mime is on the field, so remove them first before you can play it.

Try to quickly get rid of it. Its ability could potentially plow through a weak zombie and hit you in one turn of combat. Leaving no zombie to combat it will result in you losing 4

, which is large enough and could be troubling.

Beware when this plant is teaming up with other plants such as Torchwood or The Podfather, as they will boost its strength, making it more threatening. In this case, going after these plants is a must, or you might lose early.

Many tricks such as Locust Swarm or B-flat can easily take out this plant before the fight phase begins, so using them is a good idea. Jester can also pressure your opponent from playing it, as he survives both attacks from Repeater if its strength has not been boosted, while being able to activate his ability twice. In addition, because it attacks twice, it will charge the Super-Block Meter twice, so keep that in mind. This also means that stat-degraders will be twice as effective, making Nibble a good card to play against it.

Bonus Track Buckethead can be used to prevent Repeater from performing a bonus attack, which is helpful if its strength has been increased and could destroy an important zombie or defeat the zombie hero. Knight of the Living Dead is also able to negate damage from Repeater due to its

Armored 2 trait, if it is not boosted. Gargantuar Mime is also a useful option, as it will do a bonus attack considering that Repeater is not a mime plant.

Retrieved from "https://plantsvszombies.fandom.com/wiki/Repeater_(PvZH)?oldid=2334110"
Community content is available under CC-BY-SA unless otherwise noted.