Swings in past defenses.

Swings past defenses randomly in the 4th, 5th or 6th column

(blows him away before landing)

Lost City - Day 23
Relic Hunter has hunted some pretty impressive relic in his days. Idols, antiques, curios... he's hunted 'em all.
Relic Hunter Zombie is a zombie encountered in Lost City. He is similar to Swashbuckler Zombie. They both have the same animations and the same abilities, swinging past most of the player's defenses. The differences are that Relic Hunter Zombie can land at any tile from the fourth to the sixth column in his lane and the Relic Hunter Zombie is stronger but slower than his Pirate Seas counterpart.

Swings in past defenses.

Relic Hunter Zombie is much more dangerous than his predecessor, Swashbuckler Zombie, due to his increased health and ability to land farther on your lawn, despite lower speed. One group of zombies in the fourth column, some Porter Gargantuars and Excavator Zombies are enough to cause serious problems to your defense. The best weapon against Relic Hunter is Blover, which can also eliminate some Bug Zombies in the process. Also, it has a low sun cost and a very fast recharge, so it can be planted easily whenever needed.

Tall-nut and Endurian can be useful for protecting the third column of these zombies. Strong plants such as Coconut Cannon and Winter Melon are needed to kill a group of them, especially in the Temple of Bloom where these zombies are common, appearing with a group of Porter Gargantuars. Hurrikale may also be useful in regular levels in Lost City against this zombie and Lost Pilot Zombies.

He is especially annoying in Beghouled Blitz - Step 5. He can land straight into the heart of your defenses, eating valuable offensive plants and absorbing a considerable amount of damage before dying, protecting the other zombies behind him. Try to kill them before they can do much harm.

Split Peas when in front of them can deal considerable damage to Relic Hunters. Keep in mind, however, that if you have lower level plants they may eat one. Be sure to complement Split Peas with another offensive plant such as a moderate-level Peashooter.

Relic Hunter Zombie as seen in the trailer 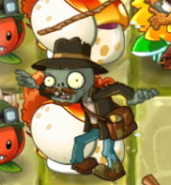 Bunch of Relic Hunter Zombies swinging in on the various columns

A Relic Hunter Zombie swinging with his Pirate Seas counterpart 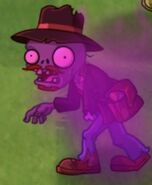 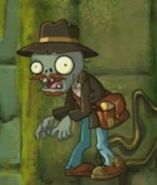 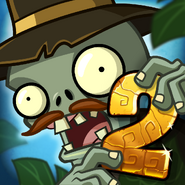 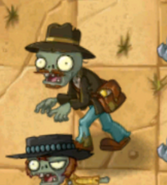 A Relic Hunter Zombie in the Wild West 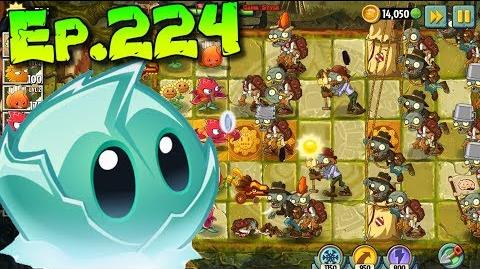