While in your hand: At end of turn, this transforms into a random Plant with
+1

. It keeps this ability.
"You never know what the next life has in store for you," she says. "So get the most out of this one while you can."
Reincarnation is a galactic legendary plant card in Plants vs. Zombies Heroes and a member of the

. She does not have any traits, and her ability transforms her into a random plant from the entire game at the end of each turn and gives it +1

She is based on the carnation (Dianthus caryophyllus), a species of Dianthus, which is a genus of about 300 species of flowering plants in the family Caryophyllaceae.

Her name and ability are both puns on the real meaning of reincarnation, the philosophical or religious concept that an aspect of a living being starts a new life in a different physical body after each death.

"You never know what the next life has in store for you," she says. "So get the most out of this one while you can."

This card is a risky one to play, but also a good one if you play her well. As she is RNG-based, you will never know what she will transform into, so you have to take your chances on whether you want to take the risk for an even better card, or to just play her right away. Either way, the small stat boost for the plant transformed from Reincarnation doesn't hurt.

Also, take note that this ability only works while Reincarnation is in your hand, and occurs at the end of each turn, effectively giving you a card disadvantage should you press your luck and hold your play.

A good way to obtain a good plant is to have multiple Reincarnation cards in your deck for faster transformation and more choices of plants, in addition to being Conjured by Cosmic Flower or Captain Cucumber. However, she will not keep any bonuses from abilities if she transforms.

Despite her being a flower, her flower synergy doesn't do her much good unless she either transforms into another flower, or you play her as soon as she is drawn at the start of the turn. If you decide to use this as soon as you draw her, she works well as Briar Rose and Power Flower bait, but only as Solar Flare, not to mention putting her ability to complete waste, as Reincarnation's stats aren't good in particular.

You cannot do much with this card as you will never know if your opponent has this card, nor can you know what plant she has transformed into. Just pay attention if your opponent is playing a luck-based deck so you can predict if they may have this card, as her ability can lead to the opponent playing an out-of-class plant. If you fear a strong plant is about to be played, be sure to have instant-kill cards at disposal to prepare for a potentially dangerous plant. Or, you could just test your luck and Bounce her.

It should be noted that A.I opponents tend to play this on the turn they draw it, making her ability redundant. If that happens, Rolling Stone would also being a good option to use. 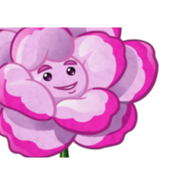 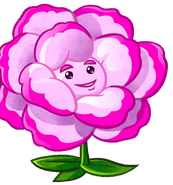 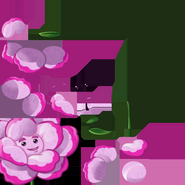 4 Reincarnation cards in the mulligan section

Reincarnation on the background of the Galactic Gardens battlefield 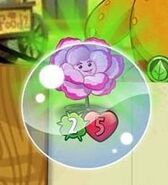 Bubble Up being used on Reincarnation

Reincarnation being the featured card in a Daily Challenge