When played: Each player draws two cards.
Regifting: Is it really an embarrassing social faux pas? Or is it just good ol' recycling?
Regifting Zombie is an event zombie card in Plants vs. Zombies Heroes and a member of the

. He does not have any traits, and his ability gives 2 cards to both the plant and zombie hero when he is played, unless they already have ten cards in their hand.

He was introduced in the 2016 Feastivus event from December 14, 2016 to December 20, 2016 alongside Jolly Holly, and was available as the first event card to be obtained with tickets. As of February 7, 2017, he was made craftable.

His appearance and pirate tribe are based on Swashbuckler Zombie's Feastivus costume in Plants vs. Zombies 2.

The term "Regifting" was popularized by an episode of the NBC sitcom Seinfeld ("The Label Maker"). The "social faux pas or recycling" part of his description may be a reference to the fact that the characters treat regifting as a bad thing.

Regifting: Is it really an embarrassing social faux pas? Or is it just good ol' recycling?

Regifting Zombie is a mid-game option, as he costs 3

, which are average stats mid-game. Compared to Cell Phone Zombie, who gives you 1 card, Regifting Zombie gives 2 cards, but at the cost of your opponent also gaining 2 cards. In that case, be careful of playing him if your opponent has a low amount of cards. In addition, it may be wise to swap Regifting Zombie for Fun-Dead Raiser if the risk is higher than the reward. Otherwise, the plant hero may obtain cards that can help stop your attack. However, in terms of fighting, he is essentially a Fire Peashooter for zombies.

As for its ability, it can also be used to draw Pot of Gold more easily should Leprechaun Imp be played. If the game goes extremely late, you can also try to use this to make your opponent run out of cards, since the player who runs out of cards first instantly loses regardless of health. However, this occurs rarely in general matches. You can also use it to activate your Dino-Roar abilities.

Be wary when there are Dino-Roar plants such as Bananasaurus Rex on the field, as it will get boosted when Regifting Zombie is played. Additionally, if Sow Magic Beans, Moonbean, or Lima-Pleurodon had shuffled some Magic Beanstalks, your opponent will have a chance of drawing them throughout the game.

As Super Brainz or Huge-Gigantacus, you can use Firefighter or Mixed-Up Gravedigger to reactivate his ability. However, like said, be careful on when to do this, as you may supply the plant hero with cards they desperately need, putting you in a bad spot. At the same time, however, this combo can be devastating if used in a mill deck with other cards such as Pogo Bouncer and Zombot Stomp, as the plant hero cannot play anything while Gravestone zombies are revealed and they cannot block when there are 10 cards in their hand. They can also pair him with Swashbuckler Zombie and Captain Flameface.

You can use this with Quickdraw Con Man to do 2 unblockable damage to the opposing hero, and 4 extra damage from Tankylosaurus, although only Professor Brainstorm can pull this off normally.

Overall, Regifting Zombie is good at increasing the chances of you drawing good cards such as the mentioned Pot of Gold, Going Viral, or cards that create powerful synergy with one another in general, especially in the late game when you begin to run out of cards. Just be wary that playing it while the plants are in a bad spot may allow them to get the cards they need to make a comeback.

Regifting Zombie is a rather easy zombie to handle due to his average stats for the point of the game in which he is usually played in (although 3 strength is enough to take down many plants). However, his gimmick, which makes each player draw two cards, can be both beneficial or a waste of space, as you could get good cards or ones that are less useful. But for most, you may obtain cards that could help you win the game if you are low on cards.

Regardless of the type of cards you get, if you have a plant with Dino-Roar on the field, it will get a boost when Regifting Zombie is played, as you get two cards for free.

However, if you manage to have a lot of cards in your hand, you do need to be careful if Regifting Zombie is played as it prevents you from getting a Super-Block if you are holding 8 to 10 cards.

If your opponent is using a mill deck, or you do not want to see this zombie being played, you can play cards that benefit from Regifting Zombie's ability like Clique Peas or Sow Magic Beans to make your opponent think twice before playing this zombie. 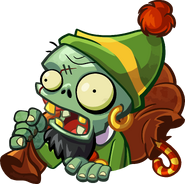 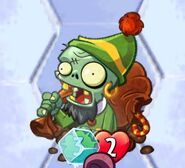 Regifting Zombie frozen (note that he is not tinted blue)

Regifting Zombie with the

Regifting Zombie with the 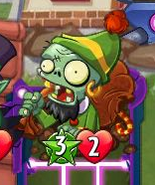 Regifting Zombie with a star icon on his strength

Regifting Zombie on an advertisement

Regifting Zombie on the advertisement for the Event Rewind Bundle

Regifting Zombie on the background of a Feastivus Multiplayer match 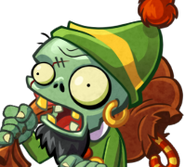