Special
This agile Artichoke shouldn't be messed with. It's as fast as a clam and quick like a cucumber!

Red Artichoke is an alternate ability for the Cactus' Garlic Drone in Plants vs. Zombies: Garden Warfare 2. It is obtainable via Rux's Bazaar for a limited time, for 500,000 coins. Compared to the Garlic Drone, it moves faster, has a higher rate of fire, and takes longer to overheat. However, compared to the Artichoke Drone, it only has five health and deals less damage but is much more accurate. It drops three red corn cobs that take 10 seconds to recharge. Individually, it takes 1 minute to recharge. Its Artichoke Hearts deals from four (five critical) to six (seven critical) damage, and if fired continuously, takes 6.60 seconds to overheat, the longest of all Cactus Drones. Like the Artichoke Drone, its airstrike is called the Baby Corn.

It is based on the ability from the Garden Warfare series, except it is red, sports a pair of goggles, and has different features.

This agile Artichoke shouldn't be messed with. It's as fast as a clam and quick like a cucumber!

Although this drone does move faster, it's still relatively easy to take you down, especially if it's a Super Brainz using his beam. It's recommended to get up close since the damage at range is very bad, and firing at long range will grab your opponents' attention and you will likely be taken down very quickly. This drone's strategy is similar to how you would play the Chomper. You should also only go for one zombie at a time, and if you're forced to fight a group, you should hide then use your airstrike, then flee at low altitude to find a lone zombie. Another good strategy would be to attack the zombies while they're distracted (while they're fighting the plants) and deploy the airstrike on groups.

The Red Artichoke in Rux's Bazaar 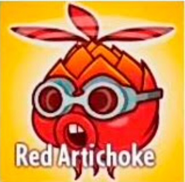