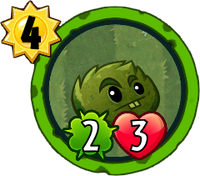 When you play a Trick, this does a Bonus Attack.
"To do what I do... it's TRICKY. I'll leave it at that."
Re-Peat Moss is a premium rare plant card in Plants vs. Zombies Heroes and a member of the

. It does not have any traits, and its ability makes it do a bonus attack every time a plant trick is played.

It is based on peat moss, any of 380 species of moss in the genus Sphagnum.

Its name is a portmanteau of "repeat," referring to its ability, and "peat moss," the real-life plant it is based on.

Its description is a reference to its ability; specifically, "trick(y)" is emphasized, implying that its ability has to do something with tricks.

This plant is at its best with Captain Combustible due to his signature superpower, Blazing Bark, and another one of his powers, Embiggen, can be devastating if you play it on Re-Peat Moss. He also has access to Time to Shine, another cheap trick that allows it to do lots of damage. He can also combo it with Banana Bombs, Banana Launcher, and Berry Blast.

Unfortunately, its usability with other heroes is quite limited, as they don't have the necessary cheap tricks to buff Re-Peat Moss and have it keep attacking in the same turn. Tricks such as Plant Food, Grape Power, and Fertilize are simply too slow to be used with Re-Peat Moss. The best use that is not with Captain Combustible would be to place Pecanolith with Grass Knuckles and use tricks such as Photosynthesizer and Grape Responsibility to have it do high damage bonus attacks.

Being high cost, you generally want to take this card out quickly. This card can rack up damage quickly if played even if it is played dry, as the Plant player can and will buff its stats. A dry Re-Peat Moss is easily countered by Electrobolt, Rolling Stone, or Exploding Fruitcake. Fronting it with a Gravestone is a viable option as well.

However, there is not much you can do if your opponent combos the Re-Peat Moss with another trick immediately. The best way to pre-emptively counter Re-Peat Moss is to use Mixed-Up Gravedigger to block most lanes with Gravestones. If you are not able to do that, then remove it immediately with a trick. Bonus Track Buckethead and Gargantuar Mime can also work, but are generally not worth running since they have limited usability when playing into other cards and strategies.