Rainbow Glitz won’t hit the stage until she’s got a bowl of Dr. Zomboss brand jelly beanz (only the pink ones), 232 brainz-scented incense sticks, and a lawn of plants ready to be fabuliciously vanquished!
Rainbow Glitz is a Brainiac Zombie in Plants vs. Zombies 3.

Her basic attack shoots 3 stars (1 in front of her, and the other 2 diagonally). She switches lanes after about two-to-three attacks, and she spawns minions every few seconds, starting with Glitter Zombies at stage 1, and Pop Star Zombies starting at stage 2. 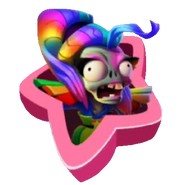