When this hurts that Plant Hero, Conjure a card that costs 2 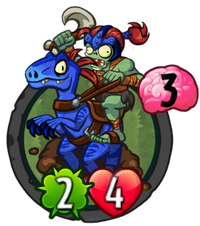 Raiding Raptor is a triassic legendary zombie card in Plants vs. Zombies Heroes, and a member of the

. It does not have any traits, and its ability Conjures a card that costs 2

or less every time it does damage to the plant hero, while its Dino-Roar ability gives it +2

It is based on a raptor, specifically the one in Plants vs. Zombies 2.

Its name is a combination of "raiding," referring to its ability, and "raptor," the real-life dinosaur it is based on.

Raiding Raptor may have average stats, but it is very powerful if you manage it well. It has decent base health, and its Dino-Roar ability gives it lots of strength. The Sneaky class can also draw cards via Imp Commander, albeit somewhat limited. However, Raiding Raptor's strength also lies in its normal ability, which Conjures a card every time it hurts your opponent. While it is more situational than simply drawing a card, it can activate other Dino-Roar abilities including its own, making it stronger as it hurts your opponent, and you won't have to worry about your hand being empty at the very least.

You can pair it with Dr. Spacetime to make the Conjured cards even cheaper, Laser Base Alpha for Raiding Raptor to always hit your opponent, or Smoke Bomb to to avoid combat with plants entirely.

Raiding Raptor's weakness, however, is its inability to boost health. While it can hit very hard if it hits your opponent many times, it will not fare well when confronted by many plants.

Its Dino-Roar ability is potent, as you can swarm your opponent with it since they will be very cheap, and give them a hard time. However, since almost all cards Conjured by it are weak, they will be more of a hindrance to you as you go later into the late game. The only exception is if you are planning to use something like Bad Moon Rising.

Impfinity appreciates Raiding Raptor's ability to supply him with low-cost zombies, which supports his rush decks, even if they are a little unreliable, but he can play Final Mission to destroy the useless ones. He can also give Raiding Raptor

Overshoot with Template:PvZHLink or Disco Dance Floor, and wipe any plant in front with damaging tricks. And while the

Crazy class lacks in card draw, it does have Unexpected Gifts which gives Raiding Raptor a whopping +6

Template:PvZHLink and Huge-Gigantacus can synergize with Raiding Raptor very well, as they can draw even more cards reliably and use bonus attacks to make Raiding Raptor wreak more havoc. However, these two have different superpowers, which means both have slightly different strategies on using it. Super Brainz can give Raiding Raptor a big boost with Telepathy, or give it more safety and power at the same time with Carried Away. Meanwhile, Huge-Gigantacus can play Ice Moon on Raiding Raptor's lane to guarantee a hit on his opponent, and even save Raiding Raptor if there are plants there, or gain Teleports via Teleportation Station. While all these superpowers can be substituted with normal cards, they are much cheaper and save you some space in your deck.

Raiding Raptor can grow to be very dangerous, especially if you let it hit you. Its strength, while initially low, can be boosted very quickly due to both its abilities combined, and while it will fall if you play a few plants on it, it does result in a loss of plants. Your opponent can also support it to make it harder to remove.

However, if you don't have any of these and it keeps gaining strength, dealing with it is going to be harder. The

Guardian class can stall it with Team-Up walls, although it is a temporary solution.

Freeze it to stall a turn (although it can't stop its Dino-Roar ability), or Bounce it (although it is more expensive than

Freezing, and Raiding Raptor can be replayed again).

Kabloom heroes can easily remove it with damaging tricks, although it will take two Banana Bombs or Berry Blasts, which hurts their card supply a bit. But

Mega-Grow heroes will have it the worst, as the only way to destroy Raiding Raptor for them is to boost their own plants, which will still result in losing the boosted plant. Fortunately, they aren't completely helpless, as they have another class to assist them.

Raiding Raptor's statistics after being Transformed from Interdimensional Zombie 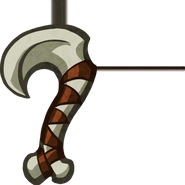 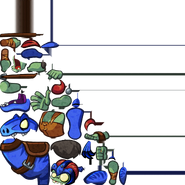 Raiding Raptor on the field

Raiding Raptor in Laser Base Alpha

Retrieved from "https://plantsvszombies.fandom.com/wiki/Raiding_Raptor?oldid=1958638"
Community content is available under CC-BY-SA unless otherwise noted.