For other uses, see Rafflesia (disambiguation).

Deals damage to three random enemies and posions them

Brave plant line in Plants vs. Zombies: All Stars which was introduced in the 1.0.104 update.

The line consists of Venomous Flower (噬毒花; pinyin: shì dú huā), Rafflesia (大王花; pinyin: dàwáng huā), and Royal Rafflesia (帝王花; pinyin: àn yīng cǎo). They all specialize in poisoning and exploding enemies and attack them by firing spore bubbles. They all attack two different enemies at once and apply one poison effect to them on normal attacks. 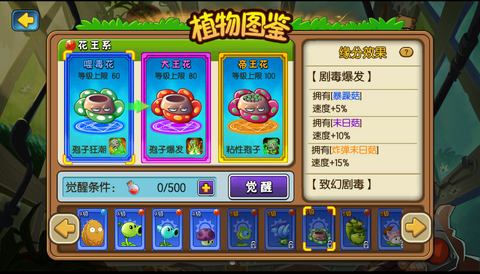 Rafflesia line can only be unlocked during time limited events. Additional puzzle pieces can be obtained through Soulmates Puzzle system.

After unlocking the Rafflesia line, additional puzzle pieces can be used to upgrade it, which increases its stats and ability LVs.

Rafflesia line stats will be increased if these specific plants are unlocked.

Retrieved from "https://plantsvszombies.fandom.com/wiki/Rafflesia_line?oldid=2301254"
Community content is available under CC-BY-SA unless otherwise noted.