For the Chinese version of Plants vs. Zombies 2 version of Radish, see Radish.

The Radish line (萝卜系; pinyin: luóbo xì) was a Class A

The second tier, Radish, was based on the plant with the same name and appearance from Chinese version of Plants vs. Zombiesz 2.

The third tier, Ginseng, was based on the Panax ginseng, otherwise known as the Asian ginseng, the source plant which all other species of ginseng originate.

The line's ability to heal and rejuvenate came from ginseng's real-world medicinal use, being used in traditional Chinese medicine for centuries. 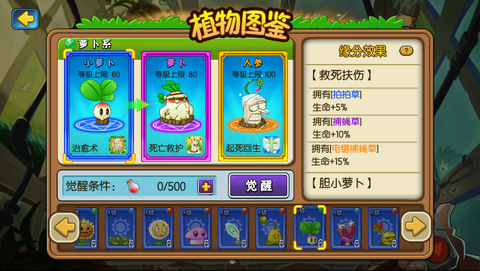 After unlocking the Radish line, additional puzzle pieces could be used to upgrade it, which increased its stats and ability LVs.

Radish line stats would be increased if these specific plants are unlocked.

Retrieved from "https://plantsvszombies.fandom.com/wiki/Radish_line?oldid=2317026"
Community content is available under CC-BY-SA unless otherwise noted.