Adds another multiplier to the player's score when killed

"What happened? I always came here suddenly if I was not careful." The rabbit zombies often said when they appeared.

Rabbit Imp was a zombie in Plants vs. Zombies Social Edition. When killed, he would add another multiplier to the player's score in Captain Mode.

He appeared from a portal, similar to the ones seen in the minigame Portal Combat. He didn't not move and if the player didn't kill him fast enough, Dr. Zomboss 's hand would come out of a portal and take him back.

This zombie isn't a problem for you, but you should target them if you want to win a game of Captain Mode. Since he hides most of the time, and he is hiding behind other zombies, so use plants like Cherry Bomb to kill him before he goes away.

Remember that he can't be frozen, so you can't make him stay on the lawn for a longer amount of time. 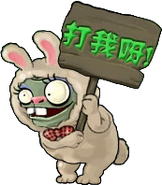 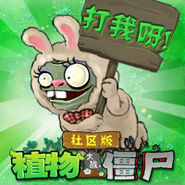 Rabbit Imp on the game's icon

Rabbit Imp in game looking at the player

A dead Rabbit Imp giving the player an extra multiplier

Rabbit jumping out of a portal

Rabbit Imp Multiplier
Add a photo to this gallery

Retrieved from "https://plantsvszombies.fandom.com/wiki/Rabbit_Imp?oldid=2351893"
Community content is available under CC-BY-SA unless otherwise noted.