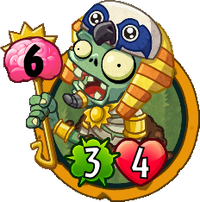 this turn.
Some nights sundown comes early...
Ra Zombie is a premium uncommon zombie card in Plants vs. Zombies Heroes, and a member of the

. He does not have any traits, and his ability takes away 2

from the plant hero on the turn he is played. His closest plant counterpart is Brainana.

His ability is a reference to his ability in Plants vs. Zombies 2, to steal sun from the sky or the player's sun-producing plants.

This card is very expensive – one of the most expensive Hearty cards. You could make Ra Zombie to essentially play it free, but the only instance making a Ra Zombie and get some use out of it is when you draw a card while Zombot Dinotronic Mechasaur is on the field, which is only possible with Cell Phone Zombie, Regifting Zombie, and Duckstache played on Mustache Monument, which is very luck-based and situational. Either way, its stats and ability do not justify its cost. As most competitive players call these kinds of cards, it is a "win-more" card, a card that has an ability that only truly benefits if you are leading the game.

Mainly because Ra Zombie can't support itself, is too weak, and its ability only lasts for one turn, it needs to benefit in a situation where you are even or in control of the game, otherwise not much will be gained from this. Ra Zombie can work in decks where it plays in a tempo-like playstyle, where you take it slowly at a time, still trying to keep ahead. Should you manage to keep the tempo and pull ahead in battle, you can send this out to set the opponent back even more; however, don't just send it out without support, as it will not last long on its own.

There are obvious uses for this, like making expensive threats delay, but what is really important to strive for when trying to make use of Ra Zombie is trying to seize the field with your zombies first.

However, with a combination of exceedingly high cost, lackluster stats, an underwhelming ability, and in general being a complete deadweight on the field, Ra Zombie is not really recommended for competitive decks. If you want your opponent to have less sun, Turquoise Skull Zombie is a better option, as while your opponent loses less sun, it can be played earlier, can boost its strength, and its ability is longer-lasting.

Stay ahead of your opponent if Ra Zombie is played, or made by Zombot Dinotronic Mechasaur during the Zombies Play phase, but it all really matters on when it is played. If Ra Zombie is played at a point of the game where you're leading, Ra Zombie is no threat by any means, and doesn't even require blocking it with a plant.

If the board for zombies is looking a little too big, you might need to try to jump back into the game (either this turn, or the next) by trying to gain some tempo through any means, or using one of your deck finishers.

Even if Ra Zombie is weak, you still have to re-think your own play, and plan your next move because Ra Zombie can be a little bit of a hindrance to overall strategy, and tempo, if that is your deck archetype. You can combat the reduction of sun with Sunflowers and other sun-producers, but it's not really worth doing at such a point in the game, because it is solely temporary for the turn.