Fires three different type of missiles and each does different damage.

R.A.D Missiles once had a dream of becoming a thin person, but when he found out that his large stomach can hold all sorts of weapons, he completely abandoned the unrealistic dream. Children also like to play with him, because they always thought his belly is full of candies. "Sometimes I have to hide in the soil," R.A.D Missiles reluctantly said, "I'm really afraid that I would hurt the children near me."

R.A.D Missiles (捣蛋萝卜; pinyin: dǎodàn luóbo) is a monthly special plant in the Chinese version of Plants vs. Zombies 2. He was released on October 1, 2015 to celebrate National Day in China. He attacks by launching missiles that bounce off zombies, similarly to A.K.E.E. Each of these missiles deal a different amount of damage. However, after launching three missiles, he needs to recharge for six seconds before being able to attack again.

R.A.D Missiles is based on Daikon, a mild-flavored winter radish usually characterized by fast-growing leaves and a long white napiform root, it contains lots of sugar, so the Almanac entry states that kids think his belly is filled with candies, which can also translate to sugar (sweet). His translated Chinese name, "Mischief Radish," is a pun on "missile radish," since "mischief" (捣蛋) and "missile" (导弹) are homophones in Chinese. Both words are written as "dǎodàn" in pinyin, which means that the two words sound the same but are different in writing. His official English name is a pun on the RAAD missile and "radish."

Besides, R.A.D Missiles' Chinese name, along with its Almanac entry, could also be a reference to “不给糖果就捣蛋”, the counterpart of "Trick or Treat," as Mischief stands for Trick.

When given Plant Food, he launches a giant radish nuke that lands on the ground and rockets through the lane, damaging all zombies in its path.

The radish nuke will now explode in a 3x3 area upon reaching the second last square of the lawn. 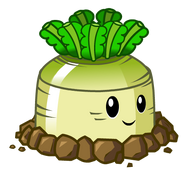 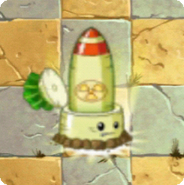 A promotional picture for R.A.D Missiles 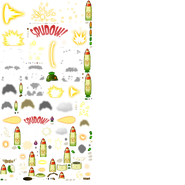 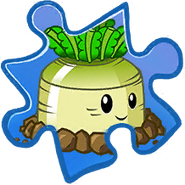 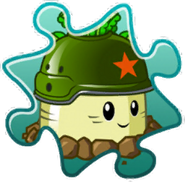 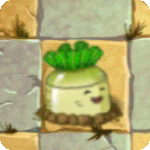 R.A.D Missiles on a Gold Tile

R.A.D Missiles in the daily reward 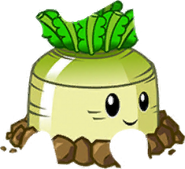 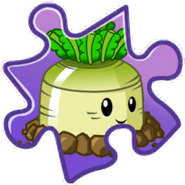 Imitated seed packet
Add a photo to this gallery

Retrieved from "https://plantsvszombies.fandom.com/wiki/R.A.D_Missiles?oldid=2362726"
Community content is available under CC-BY-SA unless otherwise noted.