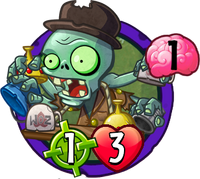 Bullseye, especially against opponents that lack healing cards.You could use Binary Stars to double the damage per turn.