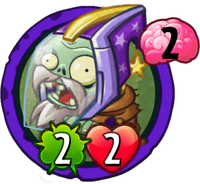 When played next to a Zombie: Conjure a Superpower.
You can call him Quazard for short.
Quasar Wizard, or Quazard, is a galactic legendary zombie card in Plants vs. Zombies Heroes and a member of the

. He does not have any traits, and his ability Conjures a superpower, including signature superpowers, when he is played on a lane adjacent to another zombie.

He is based on a Wizard Zombie, someone who uses or practices magic derived from supernatural, occult, or arcane sources.

His name is a combination of "quasar," an active galactic nucleus of very high luminosity, and "wizard," referring to his appearance.

You can call him Quazard for short.

Quasar Wizard is not much himself, but his ability is a huge help. You can get game-changing superpowers like Terror-Former 10,000, Slammin' Smackdown, and Carried Away, and it may be able to patch certain weaknesses you have. Even if you get a weaker superpower, it will still be able to make a meaningful impact in the game since you can obtain it early. Therefore, you should always try to play him on lanes where he can activate his ability.

zombie on the first turn, then play Quasar Wizard next to it. Zombies like Planetary Gladiator and Cat Lady are naturally tanky, while Amphibious zombies like Ducky Tube Zombie are hard to remove for the right opponent. Free zombies like Goat and Swabbie also count, as they can be played right before Quasar Wizard on turn 2. But if you play him a bit later in the game, it is worth noting that gravestones do not activate his ability.

You can reactivate his ability as Impfinity by using Mixed-Up Gravedigger, In-Crypted, or Firefighter, while as Electric Boogaloo you can use Secret Agent; the latter also makes Quasar Wizard threatening against your opponent.

Since he Conjures a card, he works well with Dr. Spacetime, allowing the superpower to be played for free. Zombology Teacher can also do the same thing. However, only Impfinity and Z-Mech can do so respectively.

For further information, here are the superpowers that he can Conjure:

While Quasar Wizard's stats aren't great and thus can be easily destroyed, his ability is the troublesome part. The only way to prevent him from activating his ability is to destroy every zombie on the field; while this is an easy task early-game, it may waste a lot of cards in your hand later on.

The heroes you should watch out for the most would be Impfinity and Z-Mech, as their Hearty and

Sneaky cards synergize very well with Quasar Wizard. If you see a Graveyard in play and a gravestone in it is next to a zombie, it is possible that the gravestone contains Quasar Wizard. Play Grave Buster or Grave Mistake to shut him down. It is also best to destroy any Dr. Spacetimes or Zombology Teachers on the field, because otherwise, you will have to deal with a free superpower. Either way, Quasar Wizard should not be kept alive for long, as Impfinity has cards that can reactivate his ability. 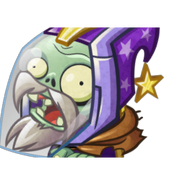 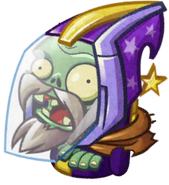 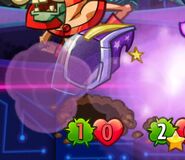 Gigantic Quasar Wizard due to a glitch

Retrieved from "https://plantsvszombies.fandom.com/wiki/Quasar_Wizard?oldid=2361446"
Community content is available under CC-BY-SA unless otherwise noted.