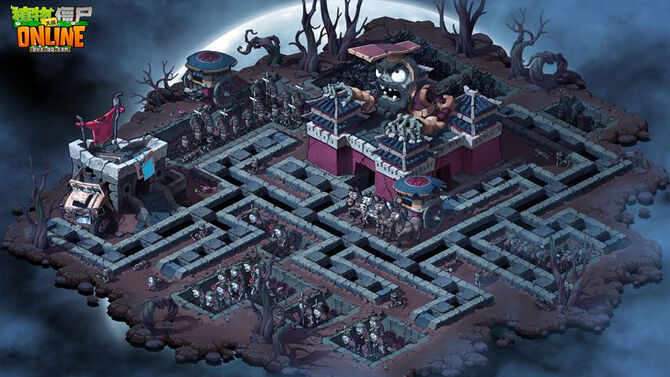 Available at the beginning.
Qin Shi Huang Mausoleum (秦始皇陵; pinyin: Qínshǐhuáng Líng) was the first world in Plants vs. Zombies Online. It appeared to be located in a mausoleum in a nocturnal setting. Judging by the time period of the world, it appeared to be slightly based on ancient China, as it took place either during or after the Qin Dynasty of ancient China.

The environment modifiers of this world were pathways. Like tombstones in Ancient Egypt, they were more detrimental than beneficial. Some zombies would always follow the preset path, even if it means switching to other lanes at times. Plants couldn't be planted on pathways (excluding Sod and Wax Gourd), so the player would choose carefully which plants to place where in order to use pathways in the most beneficial way.

Qin Shi Huang[1] was the Emperor of the Qin Dynasty of China and the first Emperor of Imperial China.

Note: All levels in the Main branch were Regular-typed levels.

*First clear reward other than the money bag.

*First clear reward other than the money bag.

An empty lawn with no tile gradients

An image of the levels with 3 stars