For the form seen in Plants vs. Zombies: All Stars, see Qigong Zombie (PvZ: AS).

Launches qigong, absorbing in front of row of plants.

(immune to his ability)

Qigong Zombie is the real Kongfu Zombie, he didn't become a zombie and forget his own martial arts, perhaps because he had too many martial arts, has been unable to forget?

Qigong Zombie (功夫气功僵尸; pinyin: gōngfū qìgōng jiāngshī) is a zombie in the Chinese version of Plants vs. Zombies 2. His ability is to move plants to the front. The only plant he cannot pull is Radish and the plants behind him in that lane.

Qigong Zombie absorbs 600 damage per shot and does not degrade until it dies at 600 damage per shot. As it moves throughout the lawn, it uses its ability to pull plants towards it. If there is a plant behind a Weapon Stand, it will be tossed away from the lawn.

Whenever you see this zombie, defeat it as soon as possible otherwise it will pull your plants toward it. Stack up Radishes at all cost to prevent it from using its ability. Defensive plants and Potato Mines are useless before it. Temporarily stall it with an Iceberg Lettuce, a Stunion or a Kernel-pult and then finish it off. Or you can do whatever you do to kill a Mecha-Football Zombie, as they act similar, but E.M.Peaches do nothing to this zombie. However, this zombie is weaker than the Mecha-Football Zombie, so you may not need to do this. 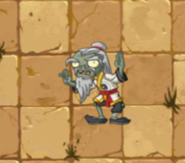 Qigong Zombie when about to pull a lane 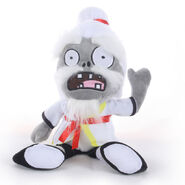 Qigong Zombie in the plush version 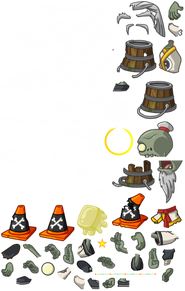 Qigong Zombie Sprites
Add a photo to this gallery

Retrieved from "https://plantsvszombies.fandom.com/wiki/Qigong_Zombie?oldid=2224825"
Community content is available under CC-BY-SA unless otherwise noted.